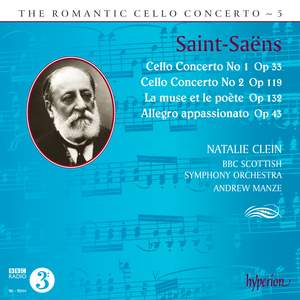 It is the light airiness of Natalie Clein's approach that works so well here...she finds a golden timbre and fleet elegance, matched by Andrew Manze and the effervescent BBC Scottish forces.... — BBC Music Magazine, October 2014, 4 out of 5 stars More…

Natalie Clein adds a remarkable collection of Saint-Saëns’ music for cello and orchestra to her impressive discography. Clein first came to prominence when she won the BBC Young Musician of the Year award in 1994; it is appropriate that she performs the music of an extraordinary child prodigy.

The first cello concerto has always been one of Saint-Saëns’ most popular pieces, Casals choosing it for his London debut in 1905. It is a gloriously playful piece that carries the listener along on a melodic and emotional rollercoaster, from the jaunty opening to the eloquence of the second movement minuet, with a persistent yearning threading its way throughout. The second concerto will be less familiar to listeners. The soloist for whom it was written, Joseph Hollman, was an energetic, muscular player and Saint-Saëns seems here to turn his back on the suave style of the first concerto. When Saint-Saëns’ pupil and friend Gabriel Fauré chose the concerto as a Conservatoire test piece, the composer was duly grateful, but admitted ‘it will never be as well known as the first; it’s too difficult’. This it certainly is, with many solo passages, huge leaps and runs that require two staves to accommodate them, and a large amount of doublestopping. Natalie Clein meets these challenges with marvellous technique, musicianship and the passion for which she has become so well known.

It is the light airiness of Natalie Clein's approach that works so well here...she finds a golden timbre and fleet elegance, matched by Andrew Manze and the effervescent BBC Scottish forces. This is as close as you'll get to musical champagne; I've a feeling Saint-Saens would have approved.

this Hyperion programme has much going for it, not least in that it features the mature, sensitive artistry of Natalie Clein. Her spirit in this music is matched by that of the BBC Scottish Symphony Orchestra under Andrew Manze, with passion, reflectiveness, architectural sweep and refinement in phrasing and dynamic colouring all finding common ground.