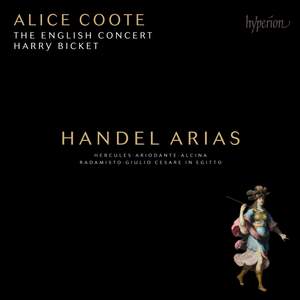 The wealth of virtues in Coote's recital include her intuitive sense of apposite, well-proportioned ornamentation and a sure feeling for just tempo...Occasionally I found her vibrato and vocal... — BBC Music Magazine, October 2014, 4 out of 5 stars More…

Handel: There in myrtle shades reclined (from Hercules)

Handel: Cease, ruler of the day, to rise (from Hercules)

Handel: Where shall I fly? (from Hercules)

Hyperion is delighted to present a tour de force from the supreme mezzo-soprano of today, Alice Coote, accompanied by The English Concert and Harry Bicket, making their Hyperion debut. Coote performs a selection of Handel’s greatest arias from opera and oratorio, employing an extraordinary range of vocal and dramatic colour, tone and emotion to produce triumphant and moving interpretations of these masterpieces.

Every piece is a highlight. Handel’s Italian operas are represented by his first two Covent Garden operas, Alcina and the great tragedy Ariodante, and also Radamisto and Giulio Cesare in Egitto (perhaps Handel’s most popular opera today). Handel’s English oratorio Hercules contains music of utter beauty. Written to a libretto by Thomas Broughton based on Sophocles’ Trachiniae, it is a drama of sombre magnificence. At its centre is the tragic figure of Hercules’ wife Dejanira, a role to rival Saul as a study in the corrosive power of jealousy. Little is known about the ‘Miss Robinson’ who created the part. But the music that Handel wrote for her suggests that she must have been a fine singing actress. Alice Coote’s powers in this direction are unrivalled today.

The wealth of virtues in Coote's recital include her intuitive sense of apposite, well-proportioned ornamentation and a sure feeling for just tempo...Occasionally I found her vibrato and vocal portamentos a little intrusive. But expressive singing with eloquent instrumental partnership make for a rewarding encounter.

Coote and The English Concert remind us in no uncertain terms that these characters and scenes rank among Handel's supreme achievements as a dramatist...'Scherza infida' is sung with a breathtaking sincerity that puts Coote's interpretation right up there with Janet Baker and Lorraine Hunt for its emotional intelligence.

So vividly imagined are Coote and Bicket’s interpretations of the 11 arias in their recording that it is like hearing in colour after a lifetime of black and white.

Coote is certainly no wallower; the crisp, directional, exuberant yet controlled coloratura fireworks of Stà nell’Ircana belie the sheer vocal heft she possesses, and the deft and fleet-footed playing of the English Concert never feels overbalanced. In fact, the sheer size of voice is thrilling, and it’s very good to hear an increasingly rare full-blooded interpretation of these operatic works.

How spoiled we are for great mezzos, and Coote is one of the most treasurable. There is some perfect singing on this disc – and the rest isn’t bad too...There is no showy emoting: everything here...is done with art rather than histrionics.