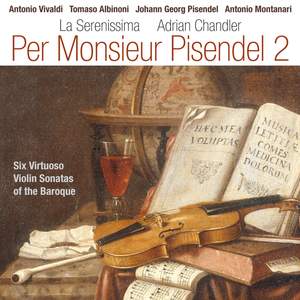 Most remarkable of all is the Sonata in A minor, a truly virtuoso piece which is said, not without justification, to have inspired Bach's Sonatas and Partitas for solo violin. It is given here... — Gramophone Magazine, Awards Issue 2014 More…

Pisendel: Sonata for Violin in A Minor

With ‘Per Monsier Pisendel 2’, Adrian Chandler and La Serenissima hark back to their debut album, performing violin sonatas by Vivaldi, Albinoni, Pisendel and Montanari with stunning virtuosity.

Adrian Chandler returns to where it all began. Per Monsieur Pisendel (AV0018) was the debut album by the Vivaldi enthusiast released on Avie in 2003, launching a recording career that has earned international plaudits, awards, chart-topping albums and recognition as one of the world’s leading authorities on the music of Vivaldi and his Italian baroque contemporaries. Per Monsieur Pisendel 2 brings together works by the dazzling German violinist’s teachers Antonio Montanari and the Red Priest, the last “Pisendel” sonata by Albinoni, and two sonatas by the Saxon himself, including the fiendish unaccompanied sonata which inspired Bach to compose his six similarly-scored works.

Most remarkable of all is the Sonata in A minor, a truly virtuoso piece which is said, not without justification, to have inspired Bach's Sonatas and Partitas for solo violin. It is given here in a quite breathtakingly effective performance by Adrian Chandler, whose effortless and stylish command of the writing brings Pisendel's legendary fully alive.

With his sumptuous and brilliant readings of two sonatas — one unaccompanied, the other supported by his excellent continuo team — the baroque violinist Chandler demonstrates again the justness of his devotion to the cause of Johann Georg Pisendel.