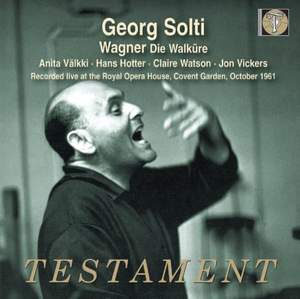 This release marks the first appearance of Georg Solti on Testament as an opera conductor in an historic performance of Die Walküre at the Royal Opera House, Covent Garden, in October 1961.

This is the first new production at the Royal Opera House conducted by Solti following his appointment as Musical Director of the Covent Garden Opera Company in 1961.

The overall performance received high praise for its intensity and drive as well as Solti’s fine musicianship.

Solti obtains spectacularly fine playing from the Covent Garden Orchestra, described by the critics as ‘superb’, ‘magnificent’, ‘the finest since the war’ and ‘exciting beyond words’.

The production was meant to be the start of a complete Ring cycle directed by Hans Hotter and designed by Herbert Kern but Kern was replaced by Günther Schneider-Siemssen and the production revised, so this version stands alone and is not part of the eventual Ring cycle as completed in 1964.

Recorded live on 2 October 1961 after the premiere on 29 September.

This previously unpublished BBC recording, documenting Georg Solti’s first new production as Royal Opera music director, shows how he seized the company by the throat, investing the music with the intensity and drive that became his hallmark in Wagner (and much else).

Though it shows how quickly orchestral standards at the Royal Opera House improved after his arrival – the playing is superb, secure and thrillingly crisp – the performance as a whole is uneven...On the plus side, though, are Jon Vickers' thrilling Siegmund...and Rita Gorr's fearsome Fricka.