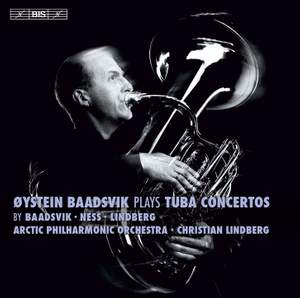 They make a very contrasted programme, full of humour...Baadsvik's musical language is tonal and he has a gift for light-filled, lyrical melodic lines...Musically [Bogey Thresher is] the most... — Gramophone Magazine, October 2014 More…

I. Panda Searching for Something He Cannot Find

V. Speech of the Panda (Cadenza-Intermezzo)

VI. Panda Climbing up the Hill… into a World of Freedom

One of today’s foremost exponents of his instrument, the Norwegian tubist Øystein Baadsvik is also an untiring champion when it comes to expanding the tuba repertoire. Himself a composer/arranger whose work can be heard on several of his previous nine releases on BIS, Baadsvik opens this new release with his own Tuba Concerto from 2012. He describes the work as containing ‘elements from a variety of musical styles’, something which can be heard in the first movement – with its imitations of the typical ostinatos of the amadinda, an African xylophone – as well as in the closing third movement, inspired by up-tempo jazz. The work that follows is a 2011 commission from Baadsvik and the Arctic Philharmonic Orchestra, written by the Norwegian composer Jon Øivind Ness. Ness has been influenced by the French school of spectral music, but his music also includes references to genres on the edge of popular culture, and in Bogey Thresher the influence from ambient music is quite possible to hear, with atmospheric and contemplative passages that are interspersed with more traditionally structured episodes. Often incorporating elements of humour in his works, the composer explains the work’s title as meaning ‘a machine designed to harvest ghosts’. For several years Baadsvik has collaborated regularly with Christian Lindberg, in the latter’s capacity of trombonist as well as composer and conductor. Chief conductor of the Arctic Philharmonic Orchestra, Christian Lindberg has also composed the final work on the disc, dedicating it to Baadsvik, ‘a great tuba player and my good friend’. With its colourful movement titles, the concerto Panda in Love seems to tell a story, but the composer states that his work should not be regarded as programme music… ‘Just like a dream cannot be fully expressed in words, the work would only suffer from any attempt to explain it.’

They make a very contrasted programme, full of humour...Baadsvik's musical language is tonal and he has a gift for light-filled, lyrical melodic lines...Musically [Bogey Thresher is] the most interesting work here...played with a superb po-face by Baadsvik. The Arctic Philharmonic and Lindberg prove exemplary accompanists.