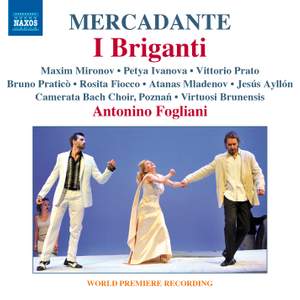 Part I: Ove a me rivolgi un guardo (Corrado, Chorus)

A highly regarded composer in his day and considered the equal of Rossini, Bellini and Donizetti, Saverio Mercadante pioneered the transformation of bel canto opera into real music drama. He wrote the operatic tragedy I Briganti (The Brigands) not only to prove himself to the Parisian public but as a direct challenge to Bellini’s I puritani, premièred the previous year. Mercadante’s individual style of canto fiorito and distinctive theatricality demonstrate that opera need not be a mere succession of virtuoso vocal arias, and it paved the way for Verdi’s later dramas. Prepared from a new critical edition, this production was described as ‘outstanding’ by The New York Times.

Antonino Fogliani, conducting a Czech orchestra and Polish choir, must take credit for the spirit and style of performance.

This 2012 Wildbad theatre revival has the Russian tenor Maxim Miranov in the Rubini role, and very fine he is too...it is the allure of Mironov's singing which suggests how the 'Puritani quartet' must have helped lift Mercadante's patchily written piece.

Fogliani conducts a Czech chamber orchestra in a brisk, idiomatic interpretation, and there is some admirably no-nonsense singing from a committed cast led by Bruno Praticò, Maxim Mironov and Petya Ivanova. This is recommended to all lovers of Italian opera at its gutsiest.