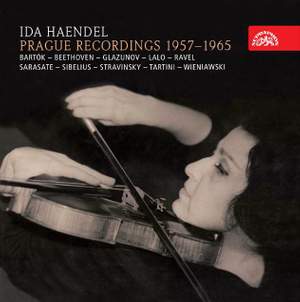 The Kreutzer is magisterial and played with intelligence and authority...In the Glazunov she brings to the score a wealth of tonal colour. The Wieniawski is a virtuoso tour de force and in the... — MusicWeb International, 14th October 2014 More…

Such attributes as charismatic, singular, exceptional are somewhat overused today. Yet in the case of Ida Haendel they are justified. Born in 1928 into a Polish Jewish family, she was a child prodigy, playing Beethoven’s violin concerto at the age of five... and leading master classes in London at the age of 85. After her Prague debut in 1957, she returned to the city throughout the 1960s, either to give concerts (most frequently with the Czech Philharmonic Orchestra conducted by Karel Ančerl, and exclusively accompanied by the pianist Alfréd Holeček at chamber recitals) or to work in a studio.

The present album features the complete live and studio recordings Ida Haendel made in Prague until 1965 deposited in the Supraphon and Czech Radio archives, with a number of them being released for the very first time. Alongside “virtuoso pieces” and sonatas, the CDs include concertos by Beethoven, Stravinsky, Wieniawski, as well as her “flagship” Sibelius. When listening, you will have no doubts as to the veracity of Ida Haendel’s seemingly immodest statement “I am the violin...”

The Kreutzer is magisterial and played with intelligence and authority...In the Glazunov she brings to the score a wealth of tonal colour. The Wieniawski is a virtuoso tour de force and in the third movement, whilst she doesn’t quite match Heifetz’s quicksilver dexterity, there’s some sparkling fingerwork.