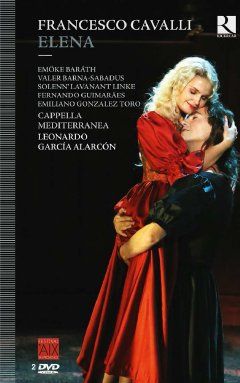 [Barath's] performance could indeed launch a thousand ships...Linke is an imperious Hippolyta that nobody in their right mind would mess with. The musical performance is excellent, but, unusually,... — Gramophone Magazine, January 2015 More…

Recorded live during the Aix-en-Provence Festival in July 2013, Cavalli’s Elena had not been performed for more than 350 years. The international press hailed this rediscovery as one of the major events on the lyric scene. With Jean-Yves Ruf ’s imaginative staging, served by an exceptional cast made up of young singers brought together by the Academy of the Aix Festival, this work is also sublimated by the talent of the instrumentalists of the Cappella Mediterranea and the theatrical talent of Leonardo García Alarcón. Elena relates the first adventures of Helen, the most beautiful woman in the world, coveted by numerous men including Menelaus, who disguises himself as an Amazon to approach her, and Theseus, who abducts her and tries to seduce her to the great displeasure of his legitimate fiancée, Hippolyta. Numerous colourful or tragic characters come to complicate the situations in this mythological farce.

[Barath's] performance could indeed launch a thousand ships...Linke is an imperious Hippolyta that nobody in their right mind would mess with. The musical performance is excellent, but, unusually, the real star of the show is Jean-Yves Ruf's poignant staging.