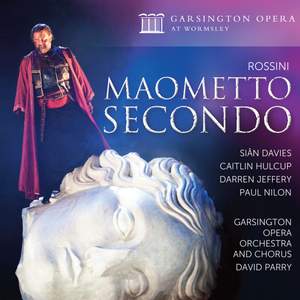 The opera’s structure comes across with epic force thanks to David Parry’s stylistically assured conducting...Sian Davies sings with temperament and consistency, not least in her ringing top... — Financial Times, 26th July 2014, 4 out of 5 stars More…

Recitativo, "Volgon due lune or già"

Set in the 15th century, Rossini’s hugely ambitious undertaking depicts the Turkish Sultan Maometto’s siege of the Venetian outpost of Negroponte and his ultimate defeat. The superb international cast is led by the suitably menacing bass-baritone Darren Jeffery in the title role, with American soprano Siân Davies in her European debut as his anguished daughter Anna, Australian mezzo Caitlin Hulcup as the general Calbo, and tenor Paul Nilon as the Venetian Governor. The assured baton of David Parry conducting the Garsington Opera Orchestra and Chorus highlights the brilliant and dramatic score.

The opera’s structure comes across with epic force thanks to David Parry’s stylistically assured conducting...Sian Davies sings with temperament and consistency, not least in her ringing top notes... Darren Jeffery uses his warm bass to commanding effect.

Parry and his energetic orchestra keep everything going at a lick, and Caitlin Hulcup as Anna’s Venetian fiancé, Darren Jeffery as the seductive Maometto and Paul Nilon as the pompous Venetian Doge all make sterling contributions. This is a rousing reading of a score that demonstrates the “serious” side of Rossini.