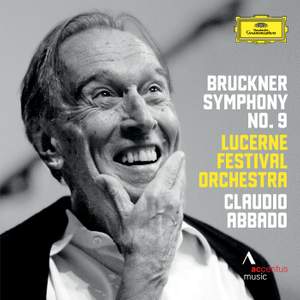 Abbado in Lucerne radiates clarity, wisdom and vision, qualities that over the years one had come to expect of him. — Gramophone Magazine, September 2014 More…

Recording of the Week,  Bruckner Symphonies from Claudio Abbado and Iván Fischer

In January 2014, music lovers worldwide were saddened to learn that Claudio Abbado had passed away.

Deutsche Grammophon feels immensely blessed and proud to be releasing together with Accentus Music Bruckner’s Symphony No. 9 in D Minor, which was recorded as part of Abbado’s final concert

The concert received very positive reviews from the press:

“Mr. Abbado led an otherworldly account of Bruckner's 9th Symphony. Never have I heard as magisterial and moving performance of the work as that given by the 80-year-old maestro and his fabulous Lucerne Festival Orchestra.” (Wall Street Journal)

The most recent Abbado / Mozart release featuring Martha Argerich has not only received critical acclaim worldwide, but did really well commercially: the album entered the pop charts in Italy at 16 and is still in the German classical charts at number 4.

This new and unique Bruckner album has a real potential amongst the core classical audiences worldwide.

To support the release, DG has filmed an interview with Sid McLauchlan who has been Claudio Abbado's DG producer for many years.

This release is a fitting tribute to an irreplaceable artist, who was one of the greatest conductors and most inspiring musical figures of our time.

With this record, Deutsche Grammophon and Accentus Music wish to pay tribute to the maestro and honour what would have been his 81st birthday at the end of June

This was a very special concert which captivated the audience:

Abbado in Lucerne radiates clarity, wisdom and vision, qualities that over the years one had come to expect of him.

Abbado establishes tension right at the outset of the first movement, the horns calling across wide vistas...There is only one word to describe properly the performance of the great Adagio: magnificent. This is emphatically not an elegiac performance; rather, it’s noble in character. Abbado shapes Bruckner’s long paragraphs with complete understanding and always there’s a wonderful sense of line. The playing is simply peerless.

what a recording...from the horns' opening portentous statement you can tell you're in for something special indeed.

There is an intensity in the string-playing...and a sense of spiritual striving that culminates in one of the most awe-inspiring accounts of the great concluding adagio I have heard. This is a poignant memory of a magisterial interpreter: a Bruckner Ninth for the ages.

There was a transparency to [Abbado's Lucerne Bruckner recordings], which is beautifully captured again on this disc...in this final musical testament, time seems infinitely elastic, and everything has all the space it needs.

The spiritual intensity of [the slow] movement is quite special. Who needs Bruckner’s uncompleted finale after this?...Abbado’s forces never seem heavy. Slenderer passages have the intimacy of chamber music, the lines of melody delicately coloured and intertwined, deliciously played. Clearly recorded, too.