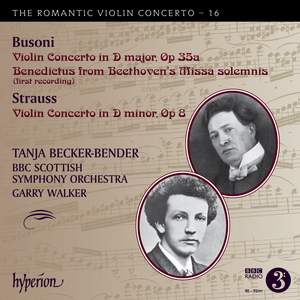 Becker-Bender plays with enthusiasm and accuracy, and when she finally hits a whimsical melody about six minutes in[to the Busoni], it's charming and skittish...There's plenty of virtuosic solo... — BBC Music Magazine, November 2014, 4 out of 5 stars More…

German violinist Tanja Becker-Bender returns to the Romantic Violin Concerto series having dazzled the critics with her ‘great lyrical force and tremendous sense of drama’ in her recording of the Reger concerto. Here she appears with Hyperion house band the BBC Scottish Symphony Orchestra, conducted by Garry Walker, in Volume 16: concertos by Busoni and Strauss, each composer’s only example of the genre.

In D major, the key of Beethoven’s and Brahms’s violin concertos, Busoni’s Violin Concerto is clearly intended to continue their lineage—significantly, Busoni wrote cadenzas for both of them—although it never descends into mere imitation. Although it uses quite a large orchestra, it is transparently scored, with plenty of Italianate cantilena for the soloist. Also included is Busoni’s transcription of the Benedictus from Beethoven’s Missa solemnis, which brings the solo violin to the fore, with instrumental obbligati representing the vocal contributions.

The seventeen-year-old Strauss wrote his Violin Concerto in 1881–2, during his final year at the Ludwigsgymnasium. The work was dedicated to Strauss’s violin teacher Benno Walter (1847–1901), concertmaster of the Bavarian Court Orchestra. The work is fairly unknown on the concert platform; as Tully Potter writes in his booklet notes, Tanja Becker-Bender’s interpretation should win it new friends.

Becker-Bender plays with enthusiasm and accuracy, and when she finally hits a whimsical melody about six minutes in[to the Busoni], it's charming and skittish...There's plenty of virtuosic solo writing [in the Strauss], and Becker-Bender negotiates the double-stops with ease.

She plays with ...sweet tone, sureness [of] intonation and complete understanding of Busoni's music...She plays [the Strauss][ for all its worth though cannot disguise the longueurs of the opening...Her accounts of the Lento ma non troppo and concluding Prestissimo are winning. An excellent disc.

this performance [of the Strauss] is very persuasive indeed...The real discovery of the disc for me, however, was definitely the Busoni concerto. This piece was completely new to me, but it's full of fantastic music and such imaginative touches of orchestration that I was instantly hooked...It's a wonderful performance, and has definitely converted me to the Busoni cause!

[The Busoni] audibly haunted by the ghosts of Beethoven and Brahms's violin concertos, but at just 23 minutes long, it's far less daunting. It's tuneful and easygoing too, and as Tanja Becker-Bender's performance on the latest instalment of Hyperion's romantic violin concerto series underlines, it's hard to understand why it isn't performed more often.