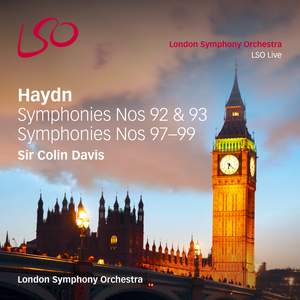 The performance is notably warmer and more personal [than his earlier accounts], it glows with affection for this life-enhancing music...[the Adagio of No. 99] unfolds with a sublime serenity... — BBC Music Magazine, October 2014, 4 out of 5 stars More…

Recording of the Week,  Colin Davis conducts the LSO in Haydn Symphonies

James listens to Colin Davis and the LSO's sparkling, poised accounts of late symphonies by Haydn.

The late Sir Colin Davis and the London Symphony Orchestra present a collection of Haydn’s London Symphonies alongside the spirited Oxford Symphony. Sir Colin Davis was long recognised as a pre-eminent Haydn interpreter. During his Indian summer with the orchestra he recorded both 'The Creation' and 'The Seasons' for LSO Live. The symphonies presented here were recorded in 2011 and make for revelatory listening.

Entering a new chapter after the death of Prince Nikolaus Esterházy, Haydn’s forward-looking late symphonies were conceived on a large scale and exude all the hallmarks of the composer’s protean maturity. Surpassing even his own high standards and received to an enormous success, their expressive strength and inventive mastery of form gave his international reputation a substantial boost: Haydn’s contrapuntal mastery and thematic rigour are laid bare for all to see.

The performance is notably warmer and more personal [than his earlier accounts], it glows with affection for this life-enhancing music...[the Adagio of No. 99] unfolds with a sublime serenity that is quite special...Those who love Haydn should hear this set.

Davis’s tempi may be gentler than in his prime, and the LSO cannot match the lightness of period-instrument orchestras, but there is geniality and gracefulness aplenty.

Sir Colin's affinity with and love for this music is palpable as he (very audibly) hums and sings along, and the hard-bitten LSO have clearly caught the bug too, playing with style and sensitivity for their erstwhile chief.

If I had to choose one word to sum up these performances, it would be poise. Everything is elegant and refined...these performances simply radiate joy: you can almost see Davis's benevolent smile as he conducts Haydn's delightful slow movements, and the Allegro movements burst forth with delight. Even if you already have several recordings of these symphonies, I really can't recommend these new performances highly enough.

If anyone complains that the forces used are too large, they should remember that Haydn, like Mozart and Beethoven, liked big orchestras. In any case, the string textures Davis secures are irreproachably crisp and clear, and the rhythms vital. Not to be missed.

An unexpected and wonderful bonus to Colin Davis’s discography…Such affection is immediately established with the beginning of the irrepressible ‘Oxford’ Symphony...This is a release to treasure for great music and magnificent readings…with a conductor who tapped so perceptively and benevolently into this imaginative and indestructible music.