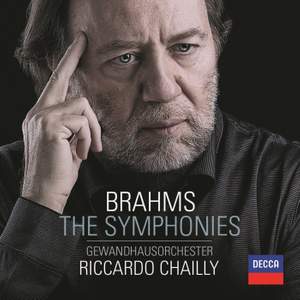 dynamic and dramatic readings, faithful to Brahms's intentions. Powerfully conceived, they are rhythmically alert, without an ounce of undue sentiment and never for an instant losing sight of... — BBC Music Magazine, December 2013, 5 out of 5 stars More…

No.4 - Intermezzo in E major

No.1 - Intermezzo in E flat major

Following the 2011 landmark Beethoven cycle, Riccardo Chailly returns with a recording of the complete Brahms symphonies and orchestral works including the overtures and Haydn Variations.

Rarities include world premiere recordings of two piano intermezzi orchestrated by Paul Klengel (brother of the Gewandhaus’ long-standing principal cellist Julius Klengel); the 9 Liebeslieder waltzes; the original first performance version of the Andante of Symphony No. 1 and the even rarer revised opening of the Fourth Symphony.

Chailly has radically rethought his approach to these works, re-examining the scores and returning to the recorded interpretations of a generation of conductors alive during Brahms’ lifetime, principally Felix Weingartner and one of his Gewandhaus predecessors Bruno Walter.

dynamic and dramatic readings, faithful to Brahms's intentions. Powerfully conceived, they are rhythmically alert, without an ounce of undue sentiment and never for an instant losing sight of the scores' rock-solid architecture. The Gewandhaus players reward him with magnificent playing, alert and sumptuously rich in sound.

There’s not a whiff of Germanic stodginess, but nor do you feel the music is being unnaturally pushed. Chailly’s tempi, faster than 20th century tradition and always consistent within themselves, bring out the “classical” in Brahms, and the Leipzigers’ performances – wonderfully lithe as well as meltingly lyrical – are a tonic.

the overriding impression I got from these performances was of Chailly wanting to blow away the cobwebs, to set aside tradition and to come up with something that sounded different.

Chailly achieves a refreshing clarity and vividness...Sometimes, I feel, clarity is achieved at the cost of lightening the bass too much. All in all, though, these are richly stimulating performances.