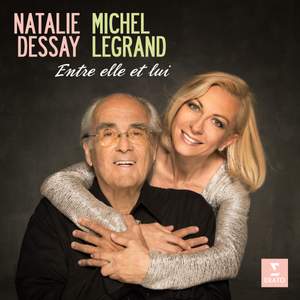 Treat yourself or a needy Francophile to this delicious if unlikely combination...She is breathy, sexy, passionate and wonderfully virtuosic in the tongue-twisting Chanson de Delphine...And Windmills... — The Times, 16th November 2013, 4 out of 5 stars More…

Legrand: Papa can you hear me? (from Yentl)

Legrand: The Windmills of your Mind

Legrand: What are you doing the rest of your life?

Legrand: The Summer Knows (from the movie Summer '42)

After her triumphs in the world’s great opera houses, Natalie Dessay crosses over. A tribute to the legendary Michel Legrand who has scored some of the most famous musical soundtracks.

This autumn, starting in fine fashion with two concerts at Paris’ legendary ‘music hall’ the Olympia, she undertakes a tour of France with the celebrated composer and jazz pianist Michel Legrand.

Legrand trained at the Paris Conservatoire with no less a teacher than Nadia Boulanger and is known around the world for his haunting music for Jacques Demy’s 1964 film Les Parapluies de Cherbourg (The Umbrellas of Cherbourg), and for his work in Hollywood, which has brought him three Oscars: for his scores for the 1983 Barbra Streisand film Yentl and the 1971 film The Summer of’42, and for his song, ‘The Windmills Of Your Mind’, from the 1968 Steve McQueen movie The Thomas Crown Affair.

Dessay first became aware of Legrand at the age of six or so, when she saw another film directed by Jacques Demy, the fairy tale Peau d’âne. “At the time, I would never have imagined singing with him. Now we are good friends and I am lucky enough to work with him on a regular basis ... I think Michel Legrand is a genius, just as Mozart was a genius. He is also a melodic virtuoso. You hear two notes and you know it’s one of his songs.” Dessay describes popular song as “an art that can demand great refinement. A song like Georges Brassens ‘Saturne’ has as much value, for me, as an opera by Bellini. In opera, you open up and let go. In a popular song, like when your singing German lieder or French art-song, you have to concentrate your voice – to learn to say a lot with less power, especially if you are using a microphone.”

The album that Dessay and Legrand have recorded together is Entre elle et lui (Between Her and Him). With a focus on voice, piano, bass and drums, it includes Legrand’s Oscar-winners, a duet from Les Parapluies de Cherbourg – which brings Dessay together with her husband, the bass-baritone Laurent Naouri, the Lilac Fairy’s song from Peau d’âne (as sung in the film by the enchanting Delphine Seyrig), and the sisters’ sassy duet from Les Demoiselles de Rochefort, performed in Jacques Demy’s film by Catherine Deneuve and her real-life sister Françoise Dorléac, but appropriated here (in this) album by Dessay and fellow soprano Patricia Petitbon. A further special guest on the album is the distinguished harpist Catherine Michel, who is also Michel Legrand’s wife.

Treat yourself or a needy Francophile to this delicious if unlikely combination...She is breathy, sexy, passionate and wonderfully virtuosic in the tongue-twisting Chanson de Delphine...And Windmills of Your Mind sounds so much better in French.