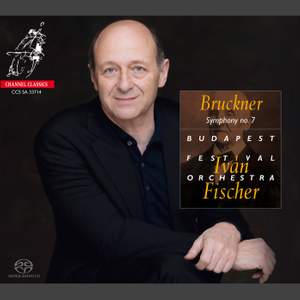 Right from the opening pp tremolando you can tell that as an interpretation this is going to be something off the beaten track. Rather than cue the familiar shimmering haze, Fischer prefers a... — Gramophone Magazine, August 2014 More…

Recording of the Week,  Bruckner Symphonies from Claudio Abbado and Iván Fischer

In his time, Bruckner was understood and admired only within a small circle, a handful of advocates of his music, both pupils andWagnerites. As Bruckner worked on the Adagio, the emotional heart of the Seventh Symphony, he heard news of the death of his idol RichardWagner, and instantly decided to dedicate it to his remembrance.

This Symphony brought the composer's breakthrough in 1885, and until today it has remained the most frequently performed of Bruckner's nine symphonies. “Bruckner is the saint, the tzadik, the bodhisattva, the guru among composers. He is the purest and most capable of religious ecstasy. Everything is seen with the clearest vision, built to majestic proportions and felt with deepest emotions. The first melody commences as if it were the purest ever written. But soon the notes of a simple E major triad of divine simplicity give way to a chromatic search surrounding the dominant note "B" with a deeply felt human desire. The melody seems to find its calm cadence, but it leaps up again, three times, aiming to attain yet higher ecstasy. And this is only the start..” Iván Fischer

Iván Fischer is founder and Music Director of the Budapest Festival Orchestra. This partnership has become one of the greatest success stories in the past 25 years of classical music. Intense international touring and a series of acclaimed recordings for Philips Classics, later for Channel Classics have contributed to Iván Fischer’s reputation as one of the world’s most visionary and successful orchestra leaders.

Right from the opening pp tremolando you can tell that as an interpretation this is going to be something off the beaten track. Rather than cue the familiar shimmering haze, Fischer prefers a softly undulating chord...That warmth remains a constant throughout the performance.

The works "lithe" and "Bruckner" don't tend to go together. Iván Fischer and his Budapest Festival Orchestra force you to break with habit. This account of the expansive Seventh Symphony is at once vigorous and lean...It won't be to all tastes. It suits mine.

the conductor’s impulses actually lead Bruckner away from eternal verities, or at least the chillier kind. The Bruckner offered here is warm, humane, with almost a kick in his step. This is a cathedral, you might say, with an Austrian coffee house attached. The warmth in part comes from the way the orchestra plays.