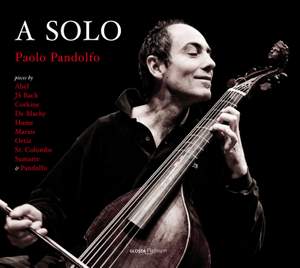 brilliant playing, musically compelling… he is a consummate artist and his playing illuminates everything he plays…such virtuosity and freedom that emphasises the music rather than himself… an... — Early Music Review, August 2014 More…

Corkine: Come live with me

Fêted by critics when it was first issued, but for some time now unavailable, this recording is reissued on Glossa as a testament to the unique contribution that Paolo Pandolfo continues to make to the art of music-making. Pandolfo has always manifested a modern human streak in his playing of the viola da gamba, demonstrating how an instrument which was born in the 16th century can still speak directly and eloquently to us today. This was vividly encapsulated on an inspirational recording on Glossa which came out back in 1998, bearing the title 'A solo' which proclaims both the personal touch, but also the exposed presence of one performer playing alone. Pandolfo takes the listener on a journey across European gamba music from its beginnings in the 16th century in Italy and Spain, including music by Diego Ortiz, its adoption into the Stuart psyche in the British Isles through Tobias Hume, William Corkine and Richard Sumarte, onto its age of supreme elegance with Marin Marais and M. de Machy in the times of Louis XIV in France, and thence to the 18th-century German Courts, nourished by French and Italian influences, and expressed in a wholly original way by JS Bach (Pandolfo’s transcription of his fourth Cello Suite) and by the “swansong” style of CF Abel. Topped and tailed by Pandolfo’s own, heartfelt, contributions to the instrument’s repertory, 'A solo' harnesses virtuosity worn lightly with the power of a stringed instrument to “sing” and to make harmony.

brilliant playing, musically compelling… he is a consummate artist and his playing illuminates everything he plays…such virtuosity and freedom that emphasises the music rather than himself… an essential part of every collection – if you missed it last time get it this time.