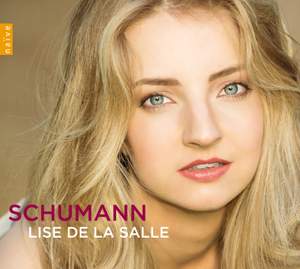 Immaculate in their textual clarity, virtuosic and elegant in tone, these are highly accomplished, keenly considered performances by an artist of conspicuous refinement. — BBC Music Magazine, November 2014, 3 out of 5 stars More…

"I’ve always listened to a lot of Schumann. He fascinated me when I was a little girl of six or seven. I’ve always been attracted by the manic side of him, his very individual ‘touch’, and I’ve always loved surrendering myself to his music. I feel very close to it. But although Schumann is one of the composers I get most out of, I waited a long time before I played him ‘seriously’... I think I didn’t want to risk being disappointed by myself. I couldn’t bring myself to imagine that everything I had dreamt about this music might not take shape exactly as I wanted. So I waited until I was completely ready, and that moment came a few years ago. The Fantasie was the apotheosis of those dreams of mine. So I built this programme around it. As for the Kinderszenen, I often played the piece Der Dichter spricht as an encore; I think it’s extraordinarily evocative, yet without any trace of technical demonstration – the power it packs into just a few notes is deeply moving to me. In a recording, I especially like to take the listener by the hand and set out to show him or her the greatest possible number of things. I always try to find a trajectory in my programmes. That’s what we have on this disc: beginning with the Fantasie as my starting-point, I double back to the very start of Schumann’s career with the Abegg Variations, then I follow the course of the short pieces, very varied in atmosphere, that make up the Kinderszenen. A musical journey needs those contrasts, and Schumann draws the essence of emotion from them." Lise de la Salle

At the age of 14, Lise de la Salle's first recording (Ravel, Rachmaninov) marked the start of her collaboration with Naïve.

In 2004, her second album (Bach, Liszt) was named CD of the Month by Gramophone. This was followed in 2007 by a third CD, the First Concertos of Shostakovich, Liszt, and Prokofiev with Lawrence Foster and the Gulbenkian Orchestra, which won the same distinction in Gramophone. In 2008 came a double album of Mozart and Prokofiev featuring a DVD (Lise de la Salle, Majeure!) directed by Jean-Philippe Perrot, which was named Editor’s Choice in Gramophone and BBC Music Magazine Choice. The year 2010 saw the release of a Chopin recording, featuring the Second Concerto with the Dresden Staatskapelle under Fabio Luisi and the four Ballades. The most recent additions to her discography are a Liszt programme and 'Lise de la Salle: A Portrait.'

Immaculate in their textual clarity, virtuosic and elegant in tone, these are highly accomplished, keenly considered performances by an artist of conspicuous refinement.

Her selection is sufficiently individual to make comparison a marginal issue, and so too is her playing, which once more displays a distinctive personal eloquence...For Clara Schumann the Fantasie was beyond wonder. Such unbridled joy is reflected in de la Salle's bold and impassioned response.

The ebb and flow of phrases in Variation 2 … is ‘delicious’, as the French would say … surely, this is one of the best recordings of this work … [de la Salle] certainly has the fingers and the arms for almost any task she might undertake, and I look forward very much to following her career.

The intimacy she brings to the smaller pieces — a rapt Träumerei, best known of the Op 15 collection — makes way for her majestic account of Op 17, the composer’s grandest masterpiece for his own instrument.