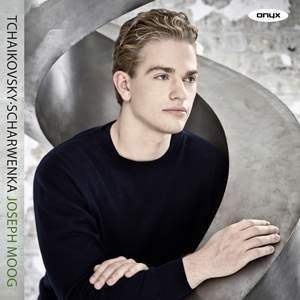 Polish composer Franz Xaver Scharwenka was one of the most important and popular composer-pianists of the late 19th century, touring to the USA a total of 26 times. His four piano concertos were once cornerstones of the concerto repertoire. Sheet music for his 'Polish Dance' Op 3/1 sold into the millions, and the 1st Piano Concerto was admired by Liszt and Tchaikovsky, whose G major sonata is paired with Scharwenka’s 2nd sonata on Joseph Moog’s third CD for ONYX Classics. Scharwenka’s almost total neglect is unjustified: his concertos and sonatas definitely merit reappraisal.

Joseph Moog is fast becoming recognised as one of the most gifted and enquiring of the younger generation of pianists. His flawless technique and wide ranging repertoire has been praised by critics worldwide.

[Moog] gives a strong performance: rich and lavishly varied in sound, powerful, panoramically phrased with an impressive command of large-scale structure, and characterised with enough sleight-of-hand to persuade us (almost) that the Scherzo could even be the work of Schumann on an off-day...[Scharwenka], too receives a performance of exceptional polish, authority and conviction.

It takes a real virtuoso to make the gnarly, block-like piano-writing of Tchaikovsky's underrated Grande Sonate sound pianistically idiomatic and supple. Joseph Moog not only succeeds in doing this but also delivers one of the modern era's best recordings of this work.

Moog is a formidably equipped pianist.

Sviatoslav Richter and Mikhail Pletnev represent the chief competition [in the Tchaikovsky], but Moog is right up there with the requisite weight, agility and dazzling panache...Moog makes the same point [in the Scharwenka], deftly and fluidly shaping the romantic contours, igniting the fireworks