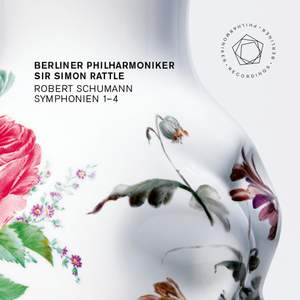 Rattle’s deft, beautifully nuanced readings have none of the plush upholstery that once characterised the Berliners’ Schumann, and yet it’s impossible to listen to these performances without... — Financial Times, 21st June 2014, More…

Chris listens to the Berlin Philharmoniker's début recording on their own record label – the complete symphonies of Schumann, conducted by Sir Simon Rattle.

The works have accompanied the orchestra throughout 2013 – in Berlin and on tour in Europe and Asia. The Berlin Tagesspiegel, wrote of a "defining moment", while the Frankfurter Allgemeine Zeitung praised the "truly sensational quality." Another special feature of this recording from the Philharmonie is the decision to use the early version of the Fourth Symphony from 1841, whose appeal for Simon Rattle lies in its extra "lightness, grace and beauty" compared to the established later version. The presentation of the product, its packaging and special features, go far beyond what standard CDs offer.

The linen-bound hardcover edition includes the Schumann cycle in different formats, and in addition to the traditional audio format on two CDs, there is also a Blu-ray Disc which enables music lovers to listen to the recording in audiophile studio quality of 96kHz/24bit or as HD video. If you are looking for the recording in even higher resolution, there is an accompanying code which allows you to download a version online in up to 192kHz/24bit. An additional code grants 48 hours access to the Berliner Philharmoniker's video platform, the Digital Concert Hall. The release also includes bonus material such as behind-the-scenes videos and a comprehensive booklet with articles about the composer, his symphonies and the Schumann tradition of the Berliner Philharmoniker.

Rattle’s deft, beautifully nuanced readings have none of the plush upholstery that once characterised the Berliners’ Schumann, and yet it’s impossible to listen to these performances without admiring the fabulous sonority of the Berlin strings...Rattle finds geniality in the music.

Rattle displays a fine affinity with these scores and though the orchestra members must have played these symphonies many times there’s never the slightest suspicion of routine here: everything sounds fresh and newly discovered – though I hasten to add that there’s never a suspicion of disruptive point-making.

Well-thought-out tempo changes and plenty of rubato make for generally very persuasive accounts of all four symphonies. Rattle has clearly thought long and hard about exactly how to bring these works to life with a large symphony orchestra, carefully balancing winds and brass so as not to obscure any other details.

There is something surprisingly Karajan-esque about Rattle’s interpretations here – surprising because Rattle has conducted Schumann widely and his performances bristle with period-conscious style... the BPO’s well-upholstered sound, at once lithe and warm, is indubitably impressive.