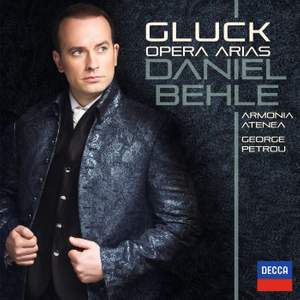 Celebrating the 300th anniversary of Gluck’s birth, Daniel Behle presents this album of Gluck’s lesser known opera arias. Showcasing their rich variety of styles, he illustrates that these works are primed for revival.

Daniel Behle is accompanied by one of Europe’s leading Baroque orchestras, Armonia Atenea, conducted by the extraordinary George Petrou.

Greece’s Armonia Atenea, conducted by George Petrou, continue to build their reputation as one of Europe’s leading Baroque orchestras.

This album is being released in conjunction with Beethoven’s ‘Creatures of Prometheus’ (also conducted by George Petrou in a searing performance with Armonia Atenea) in June 2014.

‘Throughout, he demonstrates admirable evenness of tone across his range, and the ability to subtly convey the intricacies of religious devotion.’ (The Independent).

This album coincides with the release of ‘Gluck: The Great Operas’ - a set featuring seven full operas, and a special disc of historical recordings and rarities, paying homage to the key role of this composer in the development of opera as an art form.

Seven Metastasio aria settings showcase the bright playing of Armonia Atenea and Behle's assertive singing...Behle's precise cadenza and virile embellishments are impressive...Behle is not quite so comfortable in galant music that requires sweeter suppleness...but he is outstanding in stormier music.

Behle reveals himself a nonpareil singer of the tenor roles of this month’s 300th birthday boy, Gluck. His lithe, athletic instrument has a pingy bravura quite unlike that of any other singer of this music I know...his impassioned J’ai perdu mon Eurydice engenders hope that he will tackle Orphée

His voice is clear, shapely and unfussy, bringing an ideal clarity to Gluck's transparent lines that is well matched by the exciting Greek period ensemble Armonia Atenea.