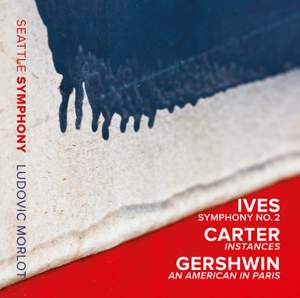 Ives: Symphony No. 2, Carter: Instances & Gershwin: An American in Paris

the American disc is a must for the recording of the premiere of Carter's Instances, his last orchestral work...A marvellous piece, superbly played. — BBC Music Magazine, November 2014, 5 out of 5 stars

Two masterpieces from geniuses of early 20th-century American music — Ives and Gershwin. With eclectic influences of jazz club, church hall, military band and popular melody, these works amount to nothing less than a portrait of American musical styles. And standing as a delicate counterpoint is a touching document of the world premiere performances of Instances, Elliott Carter’s elegiac last orchestral work.

With naturalistic imaging, depth of field and dynamic range, these recordings have been engineered to audiophile standards and aim to capture as realistically as possible the sound of the orchestra performing on the Benaroya Hall stage. Digital content will be available in: stereo, 96k 24-bit high resolution, and 5.1 surround sound.

the American disc is a must for the recording of the premiere of Carter's Instances, his last orchestral work...A marvellous piece, superbly played.