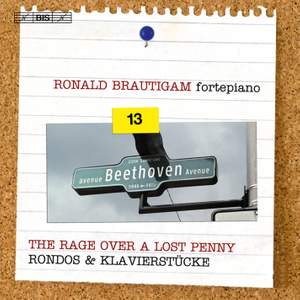 Beethoven: Rondo in A major, WoO 49

If the 32 piano sonatas and the great works in variation form (Eroica, Diabelli) form the weightiest part of Beethoven's legacy to pianists and lovers of piano music, they by no means tell the full story. In his highly acclaimed survey of the complete music for solo piano, Ronald Brautigam has previously recorded the early, unnumbered sonatas, the Bagatelles and the earlier sets of variations. He now treats us to a disc of rondos and piano pieces, spanning from one of the very earliest surviving works – a Rondo in C major composed by a 13-year old Beethoven – to what is often referred to as the composer's ‘Last Musical Thought’, an Andante maestoso in C major. This piece is in fact an arrangement, possibly by Anton Diabelli, based on parts of a movement for string quintet. Diabelli's publishing company bought the manuscript, dated November 1826, at the auction sale following Beethoven's death on 26 March 1827, and published the arrangement some years later. The original manuscript having been lost, it is however impossible to tell how much of the piano piece actually springs from Beethoven. Another rarity is the revised version of one of the composer's best-loved pieces, ‘Für Elise’. When considering it for inclusion in the Op.119 set of Bagatelles, Beethoven reworked the piece, and a transcription of his sketches by the Beethoven specialist Barry Cooper was published in 1991. An intriguing volume, thus, in terms of the rarities included, but also one with weighty repertoire pieces such as the Andante favori and the Fantasia Op.77, as well as the ever-popular Rondo a capriccio ‘The Rage Over a Lost Penny’ which has lent its name to this collection.

Brautigam's flexible yet well-proportioned tempo fluctuations enliven the C major Rondo, Op. 51 No. 1...The C major Polonaise teems with lightness, sparkle and pointed filigree in Brautigam's hands...In short, a release that upholds the high artistic and technical standards of its predecessors and more.