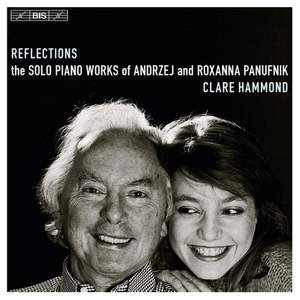 the solo piano works of Andrzej and Roxanna Panufnik

Most last less than a minute, yet they are strongly contrasted and prove arresting in Clare Hammond's commandingly virtuosic performance. — BBC Music Magazine, Auuust 2014, 4 out of 5 stars

Panufnik, A: Modlitwa do Matki Boskiej Skepskiej (Prayer to the Mother of God at Skepe) (arr. R. Panufnik for piano)

Andrzej Panufnik once wrote ‘Music gets its eternal beauty from an ideal balance of emotion and intellect’. Although Panufnik is primarily known as a composer of symphonies and large-scale orchestral pieces, his three original works for solo piano perfectly illustrate this motto. They are all highly crafted, demonstrating the composer’s fascination with mirror forms and symmetrical patterns.

The young British pianist, Clare Hammond, is greatly involved in events for the Panufnik Centenary in 2014 and has devised the present disc as her debut release on BIS. She has chosen to include two works that might be described as ‘posthumous collaborations’ between the composer and his daughter, Roxanna Panufnik, herself an acclaimed composer.

Most last less than a minute, yet they are strongly contrasted and prove arresting in Clare Hammond's commandingly virtuosic performance.