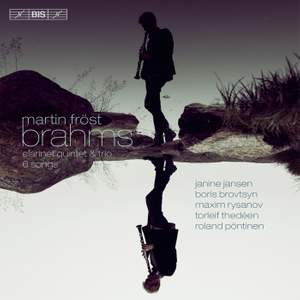 Fröst revels in the deep-plush velvet of his chalumeau regions - and, indeed, sustains this timbre throughout the instrument's register...the ensemble creates cutting-edge rhythmic urgency, and... — BBC Music Magazine, September 2014, 4 out of 5 stars More…

Johannes Brahms’s Clarinet Quintet is core repertoire, not just for clarinettists but also in the entire chamber music genre. As such, it has been on Martin Fröst’s ‘to-be-recorded list’ for a long time, and when he gathered a dream-team of string players for a concert in Stockholm in February 2013, it was the perfect opportunity for BIS to organize a recording session. Brahms’s Quintet was written in 1891 by a composer who only a year previously had renounced composing, but whose creative urge had been reawakened by his encounter with the leading clarinettist of the time, Richard Mühlfeld. Some 120 years later, Fröst – one of today’s most highly regarded musicians and the recipient of the 2014 Sonning Prize – steps into Mühlfeld’s shoes, in the company of Janine Jansen, Boris Brovtsyn, Maxim Rysanov and Torleif Thedéen. As a complement to this substantial work – with a duration of almost 35 minutes – Martin Fröst has transcribed six much-loved songs by Brahms, performing them with his chamber music partner of long standing, the eminent pianist Roland Pöntinen. The songs, composed between 1866-1886, range from high lyricism (Die Mainacht) to bitter-sweet nostalgia (Wie Melodien…), via the humourous Vergebliches Ständchen. To these new recordings has been added a substantial ‘bonus’ – Martin Fröst’s performance with Pöntinen and Thedéen of the Trio for clarinet, cello and piano, which Brahms composed for Mühlfeld in the same year as the quintet. Originally released in 2005, the recording of the Trio received a warm welcome, including an Editor’s Choice in Gramophone, as well as a ‘Disc of the Month’ on website ClassicsToday.com.

Fröst revels in the deep-plush velvet of his chalumeau regions - and, indeed, sustains this timbre throughout the instrument's register...the ensemble creates cutting-edge rhythmic urgency, and a sense of real momentum.

Sensuous beauty and taut sinew mingle for an interpretation whose fastidious attention to internal balance and every musical detail result in sovereign excellence, in a sovereign recording. Fröst's control instrumental colour is superfine, intensity of phrases shaped through swell and diminution of sound.

the way the clarinet and strings listen to each other and tailor their phrasing accordingly is an object lesson in high-class ensemble playing, while the clarinet-and-piano arrangements of the songs, in which Fröst is partnered by Roland Pöntinen, complement the chamber works nicely.