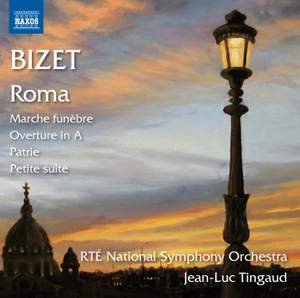 this disc offers delights aplenty, not least thanks to Jean-Luc Tingaud's stylish and alert conducting...The word that springs to mind is 'punctilio', defined by Chambers as 'exact observance... — BBC Music Magazine, April 2015, More…

Bizet: Marche funebre in B minor

Bizet: Overture in A major

The success of Bizet’s opera Carmen has overshadowed the rest of his output, but this fascinating orchestral programme, which includes a number of seldom performed works, reveals more of his talent for writing colourful, atmospheric and melodic music. The Overture in A was Bizet’s first orchestral work and unperformed in his lifetime, while the Marche funèbre was originally the prelude to an opera about love and vengeance, now lost. The dramatic overture Patrie captures the mood following the Franco-Prussian war of 1870-71, while the Petite suite is a set of orchestrations of movements from Jeux d’enfants (Children’s Games). Conceived in Italy as a symphony, after Bizet had won the Prix de Rome, Roma occupied the composer for 11 years before the final version heard here.

this disc offers delights aplenty, not least thanks to Jean-Luc Tingaud's stylish and alert conducting...The word that springs to mind is 'punctilio', defined by Chambers as 'exact observance of forms'. Everything is in place, nothing is rushed, even at the fastest tempo, and nothing drags at the slowest.

Tingaud and his admirably eager and scrupulously prepared RTÉ forces do [Bizet] proud…vividly realistic sound is the icing on the cake of another irresitible bargain from this stylish partnership. More please!