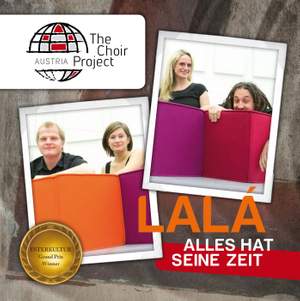 Alles hat seine Zeit (Everything has its time)

Mraz: I'm Yours (arr. A. Staple for vocal ensemble)

The internationally award-winning vocal ensemble LALÁ has delighted audiences everywhere with their unique homogeneous sound and their refreshing and sensitive interpretations. Whether they’re singing early music, classical, pop or folk song, the four young singers from Austria inspire with their unique interpretations and their unmistakable timbre. On this, with their first recording, they take you through the history of music. Franz Schubert and Johannes Brahms are there, but also some Earth, Wind and Fire, a few Viennese songs as well as their own original compositions, all given vocally perfect and uniquely expressive performances. Indeed, they prove beyond doubt that just as the title of their CD says, "Everything has its time." This CD will be released as part of a new series called "The Choir Project." Featured as part of the hänssler CLASSIC catalogue, this new series will showcase the world's best amateur choirs and become a platform as versatile and powerful as the histories and cultures of the choirs and vocal ensembles themselves, while presenting a wide-ranging repertoire from baroque to pop.