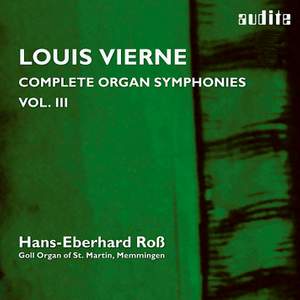 A magnificent conclusion to Hans-Eberhard Roß's survey of Vierne's Organ Symphonies. Recorded on a non-French instrument, the performances still have an excitingly idiomatic snarl, and there... — BBC Music Magazine, July 2014 More…

I. Introduction and Allegro

With Vierne's Fifth and Sixth Organ Symphonies, written in the years 1924 and 1930 respectively, the three-part complete Audite recording of the six organ symphonies is completed. Both works were written when Vierne was permanently employed as organist of Notre-Dame in Paris.

Louis Victor Jules Vierne was highly gifted and ambitious, but almost blind. He studied in Paris with Charles-Marie Widor, who founded the genre of the organ symphony. At the age of 23, in 1894, Vierne was able to deputise for his teacher in a dual capacity: at the organ console of the Parisian Church of Saint-Sulpice and in Widor‘s organ class at the Conservatory. However, Vierne‘s calling was for higher endeavours: between 1899 and 1930 he composed six organ symphonies that were to bring the genre to a hitherto unknown peak. Recorded at the Goll organ of St. Martin in Memmingen, the recording is characterised by the warm, soft and widely mensurated sound of the organ which creates unobtrusive power and fullness, making a symphonic effect in the church interior, yet always remaining clear. The polyphonic structures of the works become distinct and the transparency of sound permits fresher tempi than usual - neither of which can be a given in recordings of Vierne. Hans-Eberhard Roß is Director of Church Music in Memmingen. He has already recorded the complete organ works of César Franck for Audite. Additional information on the Goll organ and the registration is available at www.audite.de.

A magnificent conclusion to Hans-Eberhard Roß's survey of Vierne's Organ Symphonies. Recorded on a non-French instrument, the performances still have an excitingly idiomatic snarl, and there is poetic mysticism too.

Ross has no technical problems with these fearsomely complex scores, rattling through them with aplomb and authority...Above all, [he] succeeds in stressing Vierne's contrapuntal mastery with flair while retaining a strong sense of the Romantic architecture of these huge structures.

a performance of considerable distinction. [The Complete Organ symphonies are] an impressive series of recordings, each of which has to be counted amongst the best yet issued.

At times, the result comes close to Reger's, though Vierne's writing seems less self-conscious and highly wrought, and Ross ensures that the textures never become opaque or overloaded.