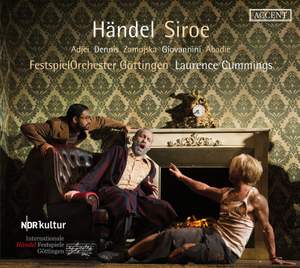 The arias are without exception quite stunning and it is surprisingly fresh and has moments of real beauty and imagination. — Early Music Review, June 2014 More…

Betrayal, revenge, inheritance conflicts and forbidden love at the Persian court: in 1728 this explosive mixture inspired Handel to compose the successful opera 'Siroe, Re di Persia', one of his last compositions for the Royal Academy of Music at the King’s Theatre. Handel based his work on the libretto by the famous poet Pietro Metastasio. In its first season 'Siroe' was performed on 18 successive evenings, but was never subsequently revived in Handel’s lifetime. It received its first modern performance in Göttingen with a top-rank cast performing under the musical direction of Laurence Cummings. Booklet notes by David Vickers.

'Siroe' is the start of a new co-operation with the International Handel Festival Göttingen and Accent Records. It is planned to release two operas and one oratorio per year. Next release, in September 2014, will be Handel's 'Faramondo' again with Laurence Cummings, recorded live this May. The Göttingen Handel Festival 2014 has the title 'Handel Royal' & has a focus on the Anglo-German collaboration which started in 1714, the year in which Georg, Prince-Elector of Hanover, acceded to the throne of Great Britain and Ireland as George I. The Lufthansa Festival 2014 is also celebrating this anniversary.

The arias are without exception quite stunning and it is surprisingly fresh and has moments of real beauty and imagination.

the performance is energetic and committed. Cummings has an ability to push the momentum through from recitative to aria and back again with naturalness and urgency, so that all seems of a piece. Soprano Anna Dennis and Aleksandra Zamojska are the most impressive cast members.