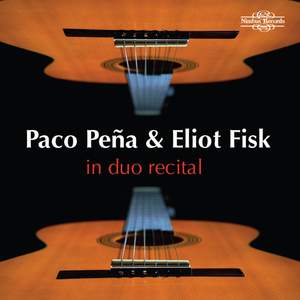 This CD has been a long time coming. It dates back really to the first time Paco and I ever met, when we performed separately at a now defunct guitar festival in Mettman, Germany, in September of 1983. This was the first time I had the chance to hear Paco live, and I can still remember many moments from his concert.

We became friends at once, but it was not until about 6 years later that we began to perform as a duo. Since that time I count Paco as one of my greatest teachers. Due to the fullness of our individual careers we have only occasionally toured together, yet the result has always been memorable.

This CD does not pretend to be either pure flamenco or pure classical. Necessarily the classical selections are coloured by Paco’s flamenco sensibility as the flamenco selections are inflected by my formation in the classical world. But that is exactly what is interesting. Paco finds things in classical music that would never occur to a classical player; and perhaps something analogous can be said of my attempts to enter the mysterious temple of flamenco.

We have organized the pieces heard here into 4 sets of 4 pieces each with a duo version of Francisco Tárrega’s famous Recuerdos de la Alhambra, as a sort of encore. There are places where each of us improvises separately and places where we each play something completely planned out. The result of this cross pollination is something new but something that is a legitimate extension of the very different yet complementary styles of music making that have formed us each as musicians. We hope you have as much fun listening to these interpretations as we have had dreaming them up! Eliot Fisk