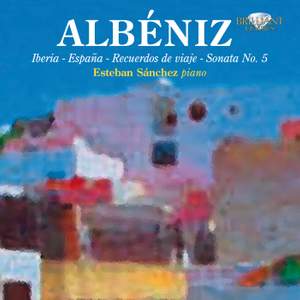 • Esteban Sánchez Herrero (1934-1997) was a Spanish pianist, a winner of many important International Awards, the Ferruccio Busoni, the Alfredo Casella and several others. He was awarded the Dinu Lipatti Medal, and finished his studies under Alfred Cortot and Carlo Zecchi. In Spain his recordings of Spanish music, made in the sixties and early seventies, are still revered for their imagination, tremendous bravura, and deep passion.

• This 3-CD set of piano music by Isaac Albéniz (1860-1909) includes Sánchez's fiery performance of that towering masterpiece, Iberia. Despite less than great sound, this is the real deal, with blazing energy engulfing the music with an intensity few others achieve.

• The other selections on the CD (España, Suite Española, Recuerdos de Viaje, Piano Sonata No.5) are all played by Sanchez with fervor and an extraordinary authenticity. • With many supremely refined performances of Iberia available in contemporary fine sound, this set should be considered as an authentic and unique alternative version of Albéniz's greatest work.