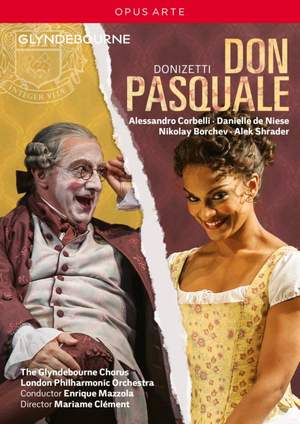 a straightforward production that eschews visual gags and focuses on the characters...Any recording with Alessandro Corbelli in the title-role has to be worth investigating and his playing of... — Gramophone Magazine, September 2014 More…

One of the reasons why Donizetti's Don Pasquale is regarded as a cornerstone of the Italian comic opera tradition is because its characters are no mere commedia dell'arte stereotypes, but complex, vulnerable human beings. This is brought to the fore in Mariame Clément's sensitive and perceptive production, which was hailed by the Financial Times as a 'Glyndebourne classic'.

Acclaimed buffo baritone Alessandro Corbelli sings the title role 'with just the right degree of lugubriousness', while Danielle de Niese, one of today's most sought-after sopranos, is an 'engaging' and 'irresistible' Norina (The Telegraph).

Extra features: Behind the Curtain, Danielle de Niese introduction, Staging the Opera and a cast gallery.

a straightforward production that eschews visual gags and focuses on the characters...Any recording with Alessandro Corbelli in the title-role has to be worth investigating and his playing of the old curmudgeon...is Italian comic opera at its most sophisticated...de Niese creates a brilliant characterisation...Mazzola gets playing of vitality out of the LPO.

Danielle de Niese shines as the manipulative glamourpuss Norina in Mariame Clément's sparky but unusually dark production from last year's Glyndebourne Festival - however, the real star is Alessandro Corbelli, striking the perfect balance between slapstick comedy and genuine pathos as the eponymous duped old man. Newcomer Alek Shrader makes his mark as a petulant, overgrown teenager of an Ernesto - sulky guitar-playing, messy bedroom and all!

de Niese has done nothing better than her portrayal of Norina: she looks gorgeous, of course, but the sharp and glassy edge that sometimes vitiates her singing of Mozart proves an asset when she’s playing a manipulative gold-digger...this is a warmly relaxed yet sharp performance that proves irresistibly entertaining.

Getting to know Don Pasquale with Danielle de Niese