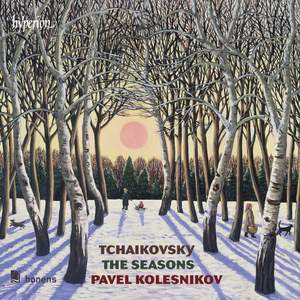 Fluid, fine-toned and with formidable power and dexterity when required, all these performances recreate Tchaikovsky's idiom, whether vivacious or drenched in Russian melancholy to rare degree...On... — Gramophone Magazine, August 2014 More…

Pavel Kolesnikov became Laureate of the Honens Prize for Piano in 2012 and gave his Wigmore Hall debut at the beginning of 2013. In his five-star review for The Daily Telegraph, John Allison praised the Russian-born, London-based artist for his recital’s ‘intelligent programming and outstanding pianism … one of the most memorable of such occasions London has witnessed’.

Hyperion is delighted to present this brilliant young artist in an album of Tchaikovsky’s Les saisons and Six morceaux.

Tchaikovsky’s symphonies and ballets are perhaps the most popular and frequently performed in the entire canon—compared to them his piano music is little-known. It is generally of a much more intimate nature than that of his compatriots, and has more in common with the emotional subtleties—and melodic beauties—of Schumann’s music.

The seasons is a cycle of twelve pieces, taking the listener through the months of the year. Each piece also has an atmospheric epigraph. The Six morceaux, Op 19, conclude with the ‘Thème original et variations’, which is often performed alone as a concert piece, but is particularly satisfying in context, as recorded here.

Fluid, fine-toned and with formidable power and dexterity when required, all these performances recreate Tchaikovsky's idiom, whether vivacious or drenched in Russian melancholy to rare degree...On this showing Kolesnikov is already a master pianist and Hyperion has captured all the bloom of his magical sonority.

it is wonderful to hear a young Russian avoiding the barnstorming style of so many contemporaries. He plays the Six Pieces with affection and élan.

In 2012, Kolesnikov took first prize in the Honens piano competition in Canada, and on the evidence of his effortlessly refined playing here, he was a worthy winner. His performances never overstretch the boundaries of what are, essentially, salon pieces...But Kolesnikov invests them with their own quietly distinctive character.