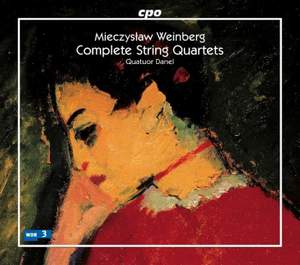 A Phenomenal Edition: Weinberg’s String Quartets on Six CDs at a Super Price Mieczyslaw Weinberg’s genuinely awe-inspiring complete seventeen string quartets are now available in a box set in interpretations by the Belgian Danel Quartet that can only be described as a musical blessing. Inspired by Shostakovich’s widow Irina (and other factors), the Quatuor Danel began acquiring the scores of all seventeen Weinberg quartets in 1995 and after a number of years (2007 to 2012) has now finished its complete recording for cpo. The BBC Music Magazine immediately named the first volume the best chamber music CD in March 2008, and further prizes followed.