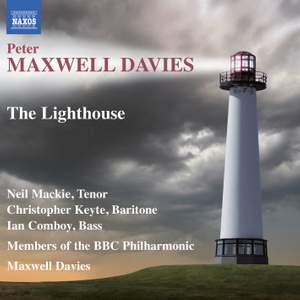 Part 2: Act: The Cry of the Beast (Arthur, Blazes, Sandy, Voice of the Cards)

On a routine tour of duty in December 1900 the supply ship Hesperus discovered the Flannan Isles lighthouse in the Outer Hebrides to be empty, the three keepers apparently having disappeared into thin air. Peter Maxwell Davies’ haunting and thrilling chamber opera The Lighthouse is heard here in its classic première recording. It shows what might have become of the three men, marooned in their storm-bound tower and overwhelmed by ghostly visions and crazed desperation, creating a dramatic imagining of a story which remains a mystery to this day.

Even without the visuals, the work's taut pacing and sharp-focus invention grip the imagination from start to finish. All three cast members excel, taking Maxwell Davies's liking for apssages of falsetto yowling in their stride; and the instrumental playing is incisively superb.

The diction of all the singers is highly commendable and most of the words are clearly delivered even when Maxwell Davies' chamber orchestra is at its most strident. Neil Mackie was at the time something of a specialist in the composer's works, and throws himself into his role with the utmost conviction. Christopher Keyte made his career in more conventional repertoire, but sounds thoroughly at home. Ian Comboy mouths his religious platitudes with relish.