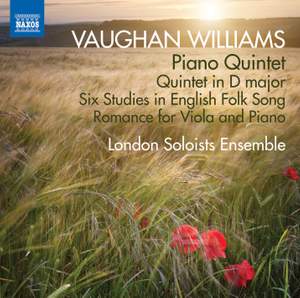 The performances are exceptional. In a collective and individual display of how to deliver chamber music at world-class level, Sarah-Jane Bradley's viola-playing - ear-mesmerising, yet never... — BBC Music Magazine, July 2014, 5 out of 5 stars More…

No. 4. Lento (She Borrowed Some of her Mother's Gold)

No. 5. Andante tranquillo (The Lady and the Dragon)

No. 6. Allegro vivace (As I Walked over London Bridge)

Ralph Vaughan Williams wrote chamber music throughout his long creative life. The Piano Quintet in C minor uses the same rich instrumentation as Schubert’s ‘Trout’ Quintet, while the life enhancing Quintet in D major has an alluring wit and playfulness of its own. Vaughan Williams’s discovery of English folk song contributed greatly to his mature voice, the Six Studies introducing subtle elaborations on each of the themes, while the origins of the undated but expressive Romance remain a mystery.

Formed in 2011 by some of Britain's most distinguished musicians, the London Soloists Ensemble have very quickly established themselves as a chamber group of superb quality. Appointed as 'Associate Ensemble' by St John's Smith Square in London, they began their first series of Sunday afternoon concerts at this prestigious venue in June 2013. They are joined for this recording by Chris West (double bass) and Tim Jackson (French horn).

The performances are exceptional. In a collective and individual display of how to deliver chamber music at world-class level, Sarah-Jane Bradley's viola-playing - ear-mesmerising, yet never obtrusive - shines even in this company.

one is able to enjoy this attractive and appealing music in its own right as well as marvelling at how, in just a few short years, Vaughan Williams went from being rather derivative to wholly personal...The London Soloists Ensemble give an excitingly powerful and dramatic account of [the Piano Quintet]

As the London Soloists Ensemble reveals in these excellent, beautifully modulated performances, the music deserves to be heard...The disc gives an intriguing picture of the evolution of his musical vocabulary.

They are lovely — romantic, melodious, wistful, beautifully crafted — even though they sound more like Elgar or Brahms than VW, with scarcely a modal harmony in an hour of music. Gently beguiling performances from top-notch players.