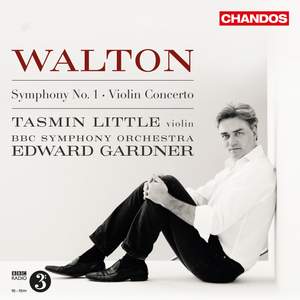 Little's way with the virtuoso passages is a notch less headlong than [on her earlier recording], allowing the ear to savour her phenomenal accuracy, yet with no loss of fire...Gardner and the... — BBC Music Magazine, June 2014, 5 out of 5 stars More…

Recording of the Week,  Walton from Edward Gardner and Tasmin Little

This week, James listens to Edward Gardner’s fiery rendition of Walton’s tempestuous Symphony No. 1 and Tasmin Little’s nimble account of his Violin Concerto.

Walton burst onto the British musical scene in his twenties, the success of works such as Façade, the Viola Concerto, and Belshazzar’s Feast establishing him in both the avant-garde and the mainstream of British composers. The obvious next step for Walton was to compose a symphony and he was duly commissioned to do so by Sir Hamilton Harty in 1932. The first complete performance of his Symphony No. 1, in 1935, was a triumph, immediately gaining the work an honoured place in British music which it has never lost. It is a highly virtuosic work with a remarkable expressive range, in turns powerful and broad, malicious, melancholic, and majestic.

The Violin Concerto was written in 1938 in response to a commission from Jascha Heifetz. The solo part reflects not only the legendary virtuosity for which Heifetz was famous, but also the sweetness and purity of his playing of long lyrical lines. In this recording the soloist is Tasmin Little whose acclaimed recordings of concertos by Britten, Elgar, Delius, and Moeran on Chandos have already established her as one of the foremost interpreters of British music for the violin.

Little's way with the virtuoso passages is a notch less headlong than [on her earlier recording], allowing the ear to savour her phenomenal accuracy, yet with no loss of fire...Gardner and the BBC SO provide an accompaniment whose range of detail..is never driven too hard...a masterclass in how to generate formidable dramatic voltage while keeping the music's eruptive energy on a tight rein.

Gardner and the BBC Symphony Orchestra profile the symphony’s turbulent syncopations, brassy dissonances and expressionist brilliance – a truly exhilarating performance. In the concerto, Little finds the nexus between sultry lyricism and rapturous virtuosity.

Gardner presides over blisteringly eloquent and splendidly unbuttoned accounts of both these Walton masterworks...Heaps to savour and cherish, in sum; certainly, seasoned Waltonians will have a ball. With magnificent truthful sound and judicious balance throughout, this terrific coupling should be snapped up without delay.

Gardner brings out all the harmonic tension in the music...in a reading which never loses momentum, even when Gardner reins back the pace to capture the aching passion of the slower episodes. There’s explosive energy a-plenty and no lack of dynamism...This is a compelling coupling of exceptionally fine Walton performances...Both these performances now become the modern benchmark for the respective works.

Gardner’s dynamic, pulsing rhythms and strong grip of the expansive structure of the first movement [of the Symphony] are particularly remarkable...Little offers a mature, deeply felt and brilliantly played account of a work she has championed more than any other contemporary violinist.

Springy rhythms, firm accents and astute observation of the typically Walton blend of rich but translucent textures and timbres contribute to the thoroughly fresh impetus in this performance of [Walton's] First Symphony...To the Violin Concerto...Little brings a mellifluous glow and a capricious spirit.