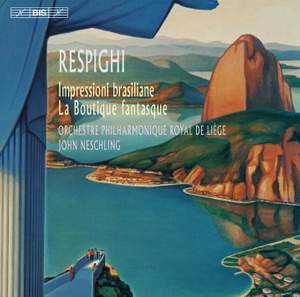 No. 2. Butantan (In a snake-garden near Sao Paulo)

Ottorino Respighi is most celebrated for his vividly colourful symphonic poems, and above all the brilliantly orchestrated trilogy celebrating the landmarks and history of Rome: The Fountains of Rome, The Pines of Rome and Roman Festivals. Impressioni brasiliane, another triptych in a similar vein – although on a smaller scale – communicates Respighi’s impressions from the summer of 1927, which he spent in Rio de Janeiro. The composer was fascinated by the popular music of Brazil, but also by the nature (the rain forests in the Rio area inspired the first part of the triptych, Notte Tropicale), animal life (a visit to the famous Butantan collection of poisonous snakes and spiders gave him material for the sinuous second part) and, naturally, the carnival, with Canzone e Danza painting a picture of riotous and colourful street festivities. Respighi’s greatness as an orchestrator is evident not only in his original works, but also in his adaptations of music by other composers. One such work is La Boutique fantasque (The Fantastic Toyshop), composed in 1918 for Diaghilev’s Ballets Russes, and performed more than 1000 times during the following few years. Respighi's score was based on piano pieces by Rossini, and it accompanies a plot centred on the love of two marionettes, the creations of a toymaker specializing in beautiful dancing dolls. In his shop the dolls perform various dances to attract customers – a tarantella, a Cossack dance, a can-can ... – providing Respighi with the opportunity to use every colour on his orchestral palette. On the present disc we hear the complete ballet score, performed by the fine Liège Royal Philharmonic making their first appearance on BIS. Conductor John Neschling, on the other hand, is a BIS veteran, with superb credentials in things Brazilian (including the complete Choros by Villa-Lobos) and a recording of Respighi's Roman Trilogy placed firmly 'among the great versions of this music' by the web site ClassicsToday.com.