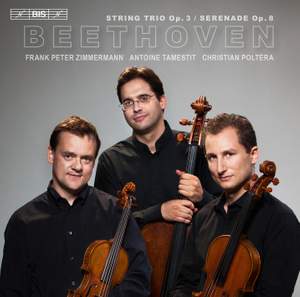 The nervous energy and lightning-quick changes of mood of the opening movement in the Op. 3 Trio are brilliantly conveyed...these are supremely polished accounts, and they make an altogether... — BBC Music Magazine, September 2014, 5 out of 5 stars More…

It is often said that Beethoven's three String Trios Op.9, together with Mozart's Divertimento, form the pinnacle of their genre – one which by the beginning of the 19th century would be almost supplanted by the string quartet. Be that as it may; it would be hugely misleading to dismiss the composer's first attempts, the Trio Op.3 and the Serenade Op.8, as mere preparations. Both works are in fact exceptionally fertile examples of the suite form, in Mozart's and Beethoven's day surviving in the guise of divertimentos and serenades. While the Op. 9 trios are all cast in the four-movement mould that we are used to from the symphonies, sonatas and string quartets of the classical period, these works consist of sequences of six and eight movements respectively, with minuets, marches and instructions such as ‘alla polacca’ reminding us of courtly light music from an earlier period. In spite of such touches, however, they are far from ‘old-fashioned’: the adventurous spirit of the young Beethoven is plain to hear, in the exceptional creative imagination in terms of textures, thematic development and formal innovation, and in the masterful writing, which gives each instrument an equal importance and a highly individual treatment. This is music which needs a first-class chamber ensemble made up of three soloists in order to be fully realized, and with the Trio Zimmermann that is exactly what is on offer here.

The nervous energy and lightning-quick changes of mood of the opening movement in the Op. 3 Trio are brilliantly conveyed...these are supremely polished accounts, and they make an altogether worthy companion disc to the same artists' award-winning recording of the Op. 9 series.

Trio Zimmermann are big on heart and technique but low on ego, which makes for superbly natural-sounding performances. Something as simple as the Andante of the Op 3 Trio becomes a great conversation piece in their hands...Add to that BIS's exemplary recording and you have a winner of a disc.