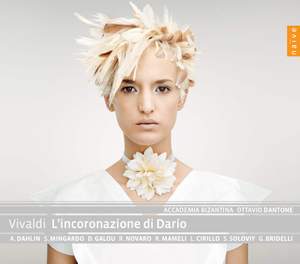 Vivaldi's music is beguiling right from the sparkling C major Sinfonia...Vocal cast and instrumentalists are first-rate and all is swiftly paced under Ottavio Dantone's direction. — BBC Music Magazine, July 2014, 5 out of 5 stars More…

'L'incoronazione di Dario', composed in 1717, is the Vivaldi Edition's 16th opera and its 53rd release. It marks the halfway point in a bold enterprise launched by Naive in 2000: the recording of the 450 works in Vivaldi's personal library. In the footsteps of the Mozart and Bach revivals 30 years ago, this is the most ambitious recording project of the century.

'L’incoronazione di Dario' must be considered one of Vivaldi’s most successful operas. Immediately opening with exceptional arias, it moves at a rapid pace, holding the listener’s attention throughout. Recitatives are interspersed with arioso interludes and there no less than eight 'big' numbers sure to join the ranks of 'Vivaldi’s best opera arias'. The excellent cast acts out this drama with conviction: Anders Dahlin’s sings Dario, with impeccable intonation and stunning coloratura passages; Sara Mingardo, as Statira, brings great depth and beauty, most especially in her Act 2 solo Cantata accompanied only by viola da gamba. Delphine Galou sings with an impressive natural ability and passion and two of her arias in particular are sure to remain benchmarks: 'D’un bel viso' and 'Ferri, ceppi, sangue, morte'; Roberta Mameli, Riccardo Novaro, Sophia Soloviy and Lucia Cirillo are all excellent and each of them has at least one star aria.

Ottavio Dantone’s conducting is marked by his ability to bring out the many subtilties in this music and by his profound understanding of recitativos which he is able to bring fully to life as theatre.

Vivaldi's music is beguiling right from the sparkling C major Sinfonia...Vocal cast and instrumentalists are first-rate and all is swiftly paced under Ottavio Dantone's direction.

The instrumentalists of Accademia Bizantina are on splendid form.

Mingardo’s Statira is a performance to treasure, as much at home in the more dramatic aspects of the role as in enchanting arias such as ‘Se palpiti in sen’ (Act 2), where the full voice is effectively lightened..my already considerable admiration for the mezzo Delphine Galou, as Statira’s wicked sister Argene, has grown, while the outstanding Lucia Cirillo and the bass Riccardo Novaro reprise excellent earlier performances, and Giuseppina Bridelli is a winning Flora, the comic nurse.