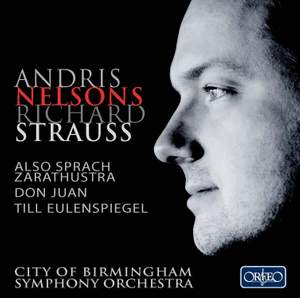 [Nelsons] knows he can ask anything of his players...Nelsons attacks when necessary with full-throttle precipitation...the shadowlands are even more sustained, highlighting the restless lover's... — BBC Music Magazine, June 2014, 5 out of 5 stars More…

In this year of Richard Strauss’s 150th birthday, it seems natural that the City of Birmingham Symphony Orchestra under Andris Nelsons should add the ultimate candle to the birthday cake, as it were, given that their previous recordings of Strauss's works for Orfeo ['Ein Heldenleben' C803091A, 'Alpine Symphony' C833111A) have been amongst the label's most successful of recent years. Here, the CBSO and its music director offer us a selection of the early tone poems: 'Don Juan', 'Till Eulenspiegel' and 'Also sprach Zarathustra'. In 'Don Juan', Strauss combined big tunes and orchestral virtuosity with a dash of immorality and wacky humour. Nelsons and the CBSO delight in the Don’s life of adventure and conquest that comes to a sticky end. The macabre climax to 'Till Eulenspiegel', with the hanging of the protagonist, is preceded by a witty exploration of just about every possible orchestral timbre, with Strauss pulling out all the stops to depict Till’s merry pranks. The world-class CBSO, homogenous across all the sections of the orchestra, is just what’s needed for the great 'Also sprach Zarathustra'. “Freely based on Friedrich Nietzsche” (as Strauss himself wrote), Nelsons and the CBSO do equal justice to Zarathustra’s address to the sun and to the mysterious close in which the motives of Man and Nature alternate in their respective keys. This new recording undoubtedly counts as one of the most awaited highlights of #Strauss150.

[Nelsons] knows he can ask anything of his players...Nelsons attacks when necessary with full-throttle precipitation...the shadowlands are even more sustained, highlighting the restless lover's death wish...but Nelson's charisma always shines through.

The treacherous start of Don Juan is securely handled … the work benefits from Nelsons’s long-term perspective and conviction …The account of Also Sprach Zarathustra has comparible focus and cohesion.

This Don Juan fairly bursts out of the starting blocks. The opening pages are hugely vital, the music driven on with impulsive swagger and white-hot energy...[Till Eulenspiegel] should be a riot of colour and incident and that’s just what we get here. Once again the CBSO’s playing is razor-sharp, except where opulence is required and then they deliver that instead.