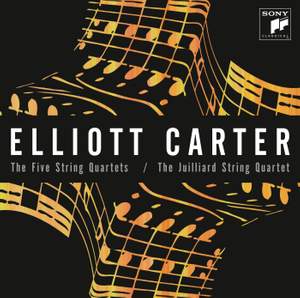 Listened to in order, it's an impressive, invigorating experience...The phrase 'modern classic' can be overused, but this release tends to confirm what has long been a growing suspicion: Carter's... — BBC Music Magazine, August 2014, 5 out of 5 stars More…

Elliott Carter’s five string quartets are landmarks in the American composer’s rich, visionary body of work. And no ensemble has been as essential in bringing these works to life as the Juilliard String Quartet. Their performances grew out of a friendship that spanned over half a century. Since its inception in 1946, the Juilliard String Quartet has made manifest the credo of founders Robert Mann and William Schuman to “play new works as if they were established masterpieces, and established masterpieces as if they were new.” They have performed over 500 works including the premieres of more than 60 pieces by American composers, with works by the country’s finest jazz musicians among them. The Juilliard Quartet was the first ensemble to play all six Bartok quartets in the United States, and its performances of Schoenberg’s quartets helped establish the works as cornerstones of the modern string quartet canon. In recent seasons, the Quartet has performed at the Vienna Konzerthaus, the Berlin Konzerthaus, the International Beethoven Festival in Bonn, the Palacio Real in Madrid, the Cite de la musique in Paris, the Miyazaki Festival, Tokyo’s Kioi Hall, the Moscow International Performing Arts Centre, London’s Wigmore Hall and Queen Elizabeth Hall, the Musica Viva Chamber Music Festival in Australia and the Israel Festival in Jerusalem. In the United States, they have appeared at Carnegie Hall, the Tanglewood Festival, the Kennedy Center, Boston’s Jordan Hall, Los Angeles’s Disney Hall, Chicago’s Orchestra Hall and San Francisco’s Herbst Theatre. In 2011, the JSQ and its recently appointed first violinist Joseph Lin were the subject of the film “Keeping Beethoven Contemporary” produced and released by Michael Blackwood Productions which showed the Quartet in rehearsal and performance of Beethoven’s Quartet in B flat Major, Op. 130 with the original last movement, the Grosse Fuge. With more than 100 releases to its credit, the JSQ is one of the most widely recorded string quartets of our time. The Quartet’s recordings of the complete Bartok quartets, the late Beethoven quartets, the complete Schoenberg quartets and Debussy and Ravel quartets have all received Grammy Awards. They were inducted into the Hall of Fame of the National Academy for Recording Arts and Sciences in 1986 for its first recording of the complete Bartok quartets and were awarded the Deutsche Schallplattenkritik Prize in 1993 for Lifetime Achievement in the recording industry. In 2011 the Juilliard String Quartet became the first classical music ensemble to be honored by The Recording Academy (the Grammy Awards) with a Lifetime Achievement Award. Specialist promo & marketing activity.

Listened to in order, it's an impressive, invigorating experience...The phrase 'modern classic' can be overused, but this release tends to confirm what has long been a growing suspicion: Carter's is one of the vital quartet cycles of the 20th century...An essential release.

The Juilliard Quartet was a leading advocate from the time it premiered the notoriously complex Third Quartet in 1973. Its interpretations of the first four quartets were taped in the early 1990s, and these are now repackaged with an equally definitive new recording of the Fifth

the Juilliard now sound a little tentative and sometimes tense, though their performances are unstintingly committed.

the Juilliard String Quartet here demonstrates the value of its close relationship with Elliott Carter...The precise, prickly texture of the pizzicato passages speaks of exhausting rehearsal...The Juilliard handles these problems, and the complex “metric modulation” of String Quartet No 1, with a grace and dexterity that surely belies the industry involved.