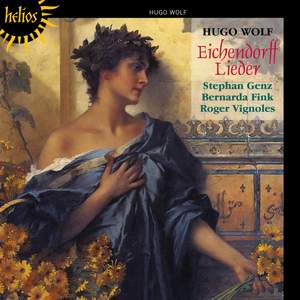 Wolf, H: In der Fremde I

This important recording presents all of Hugo Wolf’s settings of the poetry of Eichendorff—26 songs in all, several of which seem never to have been recorded before (a fact which is hard to understand because they are very attractive). One of Wolf’s favourite writers, Joseph, Freiherr von Eichendorff (1788–1857) was the German Romantic poet par excellence and his poems are full of the sounds of nature, the beauty of landscape, religious faith, and much musical imagery, with references to minstrels and other musicians. He was the poet of Schumann’s Op 39 Liederkreis, though perhaps the most well-known Eichendorff setting is Im Abendrot from Strauss’s Four Last Songs.