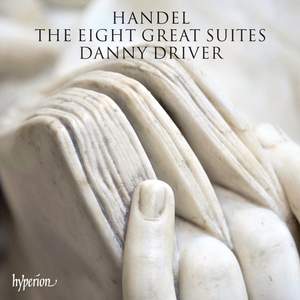 If you want to hear these pieces played on a sleek grand piano using an engagingly post-historical approach, with flawlessly stylish ornamentation...and a variety of dynamic nuances...then look... — Gramophone Magazine, May 2014 More…

Danny Driver’s recordings of CPE Bach’s keyboard works have been much admired: praised by critics as deeply stylish and revelatory accounts of eighteenth-century works on a modern piano, with Driver’s impeccable pianism constantly present. Now he turns to Handel’s ‘Eight Great Suites’, largely written when the composer was resident in Cannons, near London.

The ‘Great Suites’ are an inspired, idiosyncratic amalgam of Gallic courtly dances, Italian vocal lyricism, Teutonic counterpoint and robust English tunefulness. Whereas Bach’s keyboard suites follow broadly similar patterns, centred on the traditional French dance sequence of Allemande, Courante, Sarabande and Gigue, Handel’s are unpredictable, with no two suites alike in the number and ordering of their movements. There are fugues, arias with variations, Italian-style sonata movements, even (in No 7) a Passacaglia. Compared with the elaborate finish of Bach’s suites, Handel’s often give the impression of written-down improvisations. In the fantasia-like Preludes, especially, Handel hints at his own genius as extemporiser, while leaving plenty to the performer’s own imagination.

If you want to hear these pieces played on a sleek grand piano using an engagingly post-historical approach, with flawlessly stylish ornamentation...and a variety of dynamic nuances...then look no further.

Driver uses a modern piano, and he does so with a potent mix of discretion and vitality. The suites are full of surprises...Driver brings to it all a winning sense of style, crisply ornamented, sensitively drawing on the piano’s tonal potential for shadings of colour and alert to the rhythmic energy that Handel can generate.