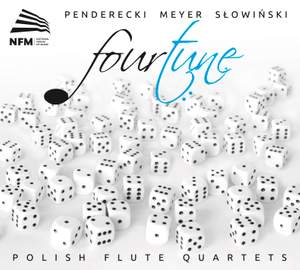 Chamber music accounts for over half of Krzysztof Meyer’s music, which consists of works for time-honoured traditional forces – most notably among them 13 string quartets, two quintets (clarinet and piano) and trios (piano and string) – as well as for less common instrumental pairings like his flute quartet Capriccio per sei strumenti, composed in 1987–88.

With his Suite subtitled 'Baroque reminiscences', Władysław Słowiński wished to pay homage to a venue which played a seminal role in the history of Polish culture. Hence the work contains many allusions to early music where a desire to arouse certain associations is clearly discernible.

In one of his interviews, Krzysztof Penderecki admitted that his source of inspiration for writing his Clarinet Quartet was the atmosphere generated by Schubert’s String Quintet during a concert in the Swiss resort of Evian. Initially he sketched it “for himself” without any concrete plans, but the work was finally composed when commissioned by the Schleswig-Holstein Festival.