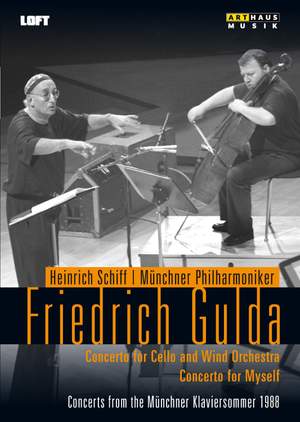 Concerts from the Münchner Klaviersommer 1988

For Friedrich Gulda pianists who didn’t also compose were not to be considered real musicians. It is no wonder therefore that he, as an exceptional pianist, is able to delight his audience with two of his own compositions at the Münchner Klaviersommer 1988. Presented here are the world premiere of Gulda’s Concerto for Myself as well as his Concerto for Cello and Wind Orchestra, which was tailor-made for the famous cellist Heinrich Schiff.

Gulda, born 1930 in Vienna, is regarded as one of the cross-over pioneers of his time – after a breathtaking classical career he turned towards Jazz, and later even to electronic music. His compositions as well as his live performances are legendary – they are the refreshing credentials of an unconventional genius. Gulda fans will be thrilled with this release!

“His nonconformity and his classical piano-playing, which is clear and far from any kind of false romanticism, belong inseparably together.” Der Spiegel