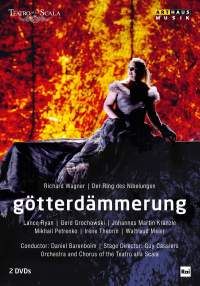 Its greatest asset is Daniel Barenboim's conducting, less vigorous perhaps than his Bayreuth cycle but generally more fluent and sweeping, with fewer abrupt tempo changes, and the La Scala orchestra... — BBC Music Magazine, May 2014, 3 out of 5 stars More…

Götterdämmerung, the final instalment of Wagner’s Ring of the Nibelung, is a story of human passions. Two essentially benevolent creatures, involved with and possibly doomed by their traffic with the gods, find treachery and evil in the world of the humans, and are ruined by the dark side of humanity.

Iréne Theorin, acclaimed worldwide for her portrayal of Wagner’s heroines, stars as Brünnhilde opposite Lance Ryan, who continues his radiant portrayal of the tragic hero Siegfried. The strong cast also includes Mikhail Petrenko as the dark antagonist Hagen and Johannes Martin Kränzle, who once again shines as his father Alberich. Waltraud Meier has a memorable appearance as Brünnhilde’s sister Waltraute.

With this 2013 recording of Götterdämmerung, the musically and visually compelling Scala Ring Cycle by Daniel Barenboim and Guy Cassiers was completed and proved to be one of the highlights of the Richard Wagner bicentenary.

“The production scores a triumph in the use of light-dark imagery to mirror the archetypal forces at play, underscoring the music rather than overwhelming it with images.” Opera Today

Its greatest asset is Daniel Barenboim's conducting, less vigorous perhaps than his Bayreuth cycle but generally more fluent and sweeping, with fewer abrupt tempo changes, and the La Scala orchestra in good form...best of all are Waltraud Meier's Waltraute and Second Norn, and Johannes Martin Kränzle...singing Alberich with a horrid vitality that shows up the rest.

These DVDs of La Scala performances...are most notable for showcasing this conductor's supreme command of the epic lyricism that goes to the heart of the Wagner style...while Cassiers achieves an uneasy compromise between tradition and innovation, Barenboim provides a masterclass in Wagner interpretation that need fear no comparison with the greatest of his precursors.