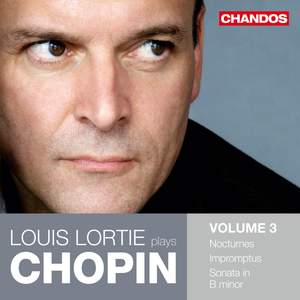 The first prerequisite of great Chopin playing is arguably beauty of tone, as well as refinement and variety...Lortie is a model Chopinist: eloquent but never sentimental, elegant without ever... — BBC Music Magazine, July 2014, 5 out of 5 stars More…

Louis Lortie here gives us the third volume in his ongoing Chopin project. Throughout the series his guiding principle has been to emulate the recital practice of the great romantic pianists, who might play a short improvisation before a major work in order to set the audience in the right frame of mind.

On this disc Lortie plays the four Impromptus and the Piano Sonata in B minor, introducing each with a Chopin Nocturne (typically of an improvisatory character) in the same or a related key.

Of all the Impromptus, the first and most famous was actually withdrawn from the public during Chopin’s lifetime. Published posthumously as Fantaisie-Impromptu, it set the mould for the unpretentious pieces that followed, all striving more toward casual entertainment than high artistic expression. The third and last of Chopin’s Piano Sonatas, Op. 58 in B minor was composed in 1845. While its four-movement design reflects a traditional approach, the appearance of imitative counterpoint, chromatic harmonies, and heightened rhythmic tension mark it as an inspired masterwork of Chopin’s late creative period.

Lortie’s previous two volumes have received extremely high praise, the magazine Pianist claiming of Vol. 2 that ‘his selected nocturnes are probably not bettered by any living pianist’.

The first prerequisite of great Chopin playing is arguably beauty of tone, as well as refinement and variety...Lortie is a model Chopinist: eloquent but never sentimental, elegant without ever sounding effete, dramatic but never exaggerated, harmonically luminous, structurally immaculate - and surprising.

Textures are chaste, lean, and translucent. Pedalling is employed as a colour device, not as an aid to legato. Harmonic structure is unambiguous, delineating the overall architecture with unparalled clarity...Rhetoric throughout is personal, human, real, and the Sonata's 25-plus minutes will have passed almost before you can believe they have begun.

Lortie's Chopin playing has a wonderful, penetrating directness about it; there's not a trace of dreamy indulgence in any of the nocturnes, though all their decorative tracery shines out with a sharp-cut brilliance, and the impromptus dance and divert without a trace of self-consciousness