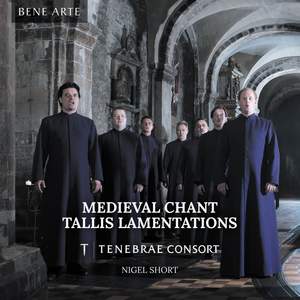 the performance of Tallis's Lamentations is majestically dark and intense, displaying this group's famous sensitivity toward musical structure, as well as their exquisite harmonic control...Only... — BBC Music Magazine, May 2014, 4 out of 5 stars More…

Tallis: Lamentations of Jeremiah I

Sheppard, J: Respond for Compline in Passiontide: In manus tuas I

Tenebrae Consort is, as you might expect, hand-picked from the award winning chamber choir Tenebrae, currently in the Specialist Classical Chart with 'Russian Treasures', their 20th album and first for own label Bene Arte. Known for their instinctive ensemble skills, the singers are directed from within the Consort by Nigel Short who leads the group to attain music making of the highest quality. Focussing on the repertoire originally written for consort performance, particularly early music, Tenebrae Consort aim to shed new interpretative light on works through the combination of both passion and precision, creating an intimate and unique concert experience. This new recording draws on the Salisbury Cathedral tradition, renowned for its ritual excellence, observation and performance, in the centuries before the Reformation. Compline, sung during Holy Week, is enhanced with Tallis 'Lamentations': some of the most poignant and intense polyphonic settings of sacred texts used in Passiontide. These settings for five lower voices prove not only the depth of Tallis devotion to the old faith and the Catholic rites but also his mastery of the polyphonic art, and cement his rightful place as one of the greatest composers of the English Renaissance.

the performance of Tallis's Lamentations is majestically dark and intense, displaying this group's famous sensitivity toward musical structure, as well as their exquisite harmonic control...Only the vibrato in the lower voices detracts occasionally from the textural unity.

The singing of the gentle psalms is hypnotically pure..Though the settings are restrained, the effect is powerful, helped by John Sheppard's Compline respond, In manus tuas. A brave and unusual disc.