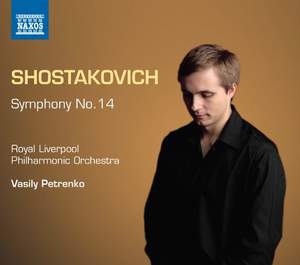 Vinogradov is the genuine bass article but his pitches can be approximate...Orchestral double basses, though, have terrific impact. — BBC Music Magazine, May 2014, 3 out of 5 stars More…

VII. In the Sante Prison: Adagio

VIII. The Zaporozhian Cossacks' Reply to the Sultan of Constantinople: Allegro

X. The Death of the Poet: Largo

At its première in June 1969 Shostakovich described his Symphony No. 14, in effect a symphonic song cycle, as ‘a fight for the liberation of humanity... a great protest against death, a reminder to live one’s life honestly, decently, nobly...’ Originally intending to write an oratorio, Shostakovich set eleven poems on the theme of mortality, and in particular early or unjust death, for two solo singers accompanied by strings and percussion. This is the penultimate release in Vasily Petrenko’s internationally acclaimed symphonic cycle.

Vinogradov is the genuine bass article but his pitches can be approximate...Orchestral double basses, though, have terrific impact.

in a performance as taut and unsparing as this, it has a power that transcends its nihilism. The bass, Alexander Vinogradov, is outstanding, and soprano Gal James also impresses with her mix of artlessness and allure.

this performance demonstrates Petrenko's and the Liverpool orchestra's fine grasp of the composer's evolving idiom, with the result that this is a deeply impressive issue all round... Gal James's timbre might be considered a shade (no more than that) light...but her intonation and diction are fine and her phrasing is excellent...Vinogradov is also most impressive.

Petrenko gets appropriately dark and brooding textures from his strings and percussion ensemble, unleashing sounds of raw ferocity...[Vinogradov] has a magnificent dark bass and trenchant delivery of the text, an ideal voice for this music. At Naxos’s bargain price, this is unmissable.