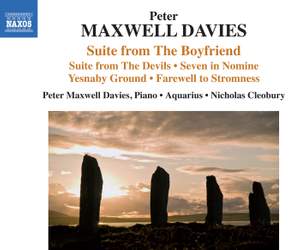 In these vintage examples of early-to-middle-period Maxwell Davies, his fairly for popular dance-forms shines through his roguishly gaudy arrangements...Maxwell Davies's score [for The Devils]... — BBC Music Magazine, June 2014, 4 out of 5 stars More…

III. A Room in Bloomsbury

IV. I Could Be Happy

I. In nomine (Taverner)

All the works on this recording have connections with the stage or theatre. The two suites are derived from scores that Maxwell Davies wrote for films by Ken Russell and could not be more different. The Boyfriend, based on a 1954 musicalby Sandy Wilson, introduces a large dance band and period motifs to great effect, while dramatic extremes depicting the film’s themes of corruption, exorcism and execution within a medieval religious setting are explored in The Devils.

Seven in Nomine evokes Maxwell Davies’ interest in medieval plainsong. The composer himself plays two of his most 8572408 popular piano pieces with their memorable evocations of Orkney landmarks.

In these vintage examples of early-to-middle-period Maxwell Davies, his fairly for popular dance-forms shines through his roguishly gaudy arrangements...Maxwell Davies's score [for The Devils] seems to probe into parallel, darkly unfolding musical processes of its own. All these performances excel

This is all stunningly recorded. Do not entertain fears of harsh early digital sound. Everything chimes cleanly yet has satisfying impact...A surprisingly fresh and agreeably discomfiting selection. Try it and be surprised.

Farewell to Stromness and the less well-known Yesnaby Ground are both reflective interludes from Maxwell Davies' Yellow Cake Revue, written in protest at the prospect of mining uranium in his adopted home, the Orkney Islands.